OVER ONE DECADE OF THE ERC FREE HOLIDAY COACHING IN AJEGUNLE

450 Additional Reasons Why Education Must be Free and Quality 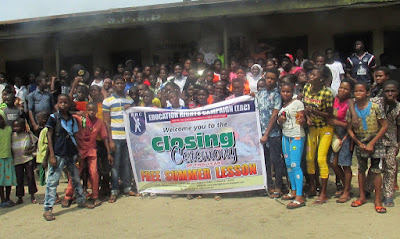 This year’ annual free summer coaching of the Education Rights Campaign (ERC) came to an end on Wednesday 9 September, 2015. This was after six weeks of the exercise with about 450 secondary school students (in SS1, SS2 and SS3) and 30 volunteer teachers participating.
Because of the very low quality of education in public schools, secondary school students often need extra coaching during the school holidays to prepare more adequately for external examinations that could get them a place in a University, polytechnic or colleges of education. But the cost of a private coaching is rarely within the means of most poor families. When it comes to poverty, Ajegunle is a synonym of a sort. Ajegunle, the Lagos community where the ERC coaching is organized, is a sprawling slum. Rarely remembered in the State government urban renewal plans, the community’s neglect is an evidence of the class-apartheid that Lagos mega city projects really is.
Like most poor communities around Lagos and across Nigeria, Ajegunle’s physical deprivation is depressing. Children run bare clothed along flea-infested swamps and yawning canals – their dark watery content swirling like the filthy cauldron of Macbeth’s witches. What goes for a home for a majority of the residents are overcrowded hovels. These depressing features nonetheless, the ERC coaching is a witness, for a decade, to the astounding talents, brilliance and remarkable potentials of Ajegunle youth, and above all, their unbreakable spirit.
At the six-week coaching were 450 students who, like thousands of others, could have had nowhere to go were the coaching not provided for free. They are 450 additional reasons government must provide free, public funded and quality education at all levels. At the closing ceremony, gifts and awards were given out to students who excelled in their different subjects. Drama, singing sessions, comedy and poetry presentation were also made by the children.
To most visitors and guests at the ceremony, it was obvious that despite the ocean of poverty in which they found themselves, these children had all it takes to excel if the proper facilities and provisions to motivate them were in place. Unfortunately, what goes for schools in the public school system are depressing school structures - often decrepit and lacking the essential facilities. Libraries and laboratories are in such poor conditions in the public school system that performance in science subjects has been on a nose-dive for years now.
By initiating the free holiday coaching in the Ajegunle community since 2005, the ERC aim to stimulate awareness over the neglect of public education and other key social services especially in poor communities. The ERC argues that the poor working and poor families should not believe the mantra that government has no business in using public resources to adequately provide free quality education. Also untrue is the argument that government alone cannot mobilize the resources to fund education. Whereas if Nigeria’s resources are democratically and judiciously managed especially through a programme of public ownership and democratic control and management of the key sectors of the economy, it would be enough to provide free and quality education at all levels.
The ERC has continually campaigned that it is the government’s responsibility to fund public education with the public resources in its custody. We firmly believe that massive investment in public education is urgently needed to eradicate the leprosy of illiteracy from the Nigerian society. What this means is that the government has to build more learning infrastructures and standard facilities in the universities, primary and secondary schools. Also there is the need for employment of more teaching staffs and adequate worker’s welfare. Findings show that there is a shortfall of at least 220, 000 teachers in the public education system in Nigeria. Lagos State for instance is experiencing a chronic shortage of teaching staff in its primary and secondary schools. To this end, the ERC has been demanding the UNESCO 26% of the annual budget as the minimum that should be allocated to public education.
Record Attendance
Since the coaching started in 2005, this is by far the largest attendance. Annually, the average attendance has often been around the region of 300. But this year, which is the eleventh edition, was different with at least 450 students participating. The coaching, which ran from August 3 till September 9, 2015, could not have been successful without the immense effort of the volunteer teachers. About thirteen academic subjects like Mathematics, English Language, Biology, Economics, Commerce, Government, Civic Education, Further Mathematics, Physics, Chemistry, Geography, Literature-in-English, and computer Science were all taught in the SS 1, SS 2 and SS 3 classes.
Side by side with the academic effort put in place by teachers, the coaching also played host to many personalities from the community and beyond. Many were from different fields and careers. They all visited the coaching to share with the students their experience of life and particularly to encourage them to take their studies serious and strive to overcome all the obstacles placed in their path by an unfair society.

The Closing Ceremony
The closing ceremony held under the theme: “THE PROBLEMS AND CHALLENGES OF PRIMARY AND SECONDARY SCHOOL EDUCATION”. Speakers at the ceremony included Mrs. Olosanya H.A - the Head of Department (HOD), education department of the Ajeromi Ifelodun Local Government. Others are Aminu Gusau, the Divisional Police Officer (DPO) of the Ajeromi Police Station who sent a representative; Mr. Abulowo Solomon Ademofe who is the Education Secretary AJIF, Dagga Tolar – Chairman of the Nigerian Union of Teachers (NUT) AJIF and NEC member of the Democratic Socialist Movement (DSM) and Hassan Taiwo Soweto – National Coordinator of the Education Rights Campaign (ERC). 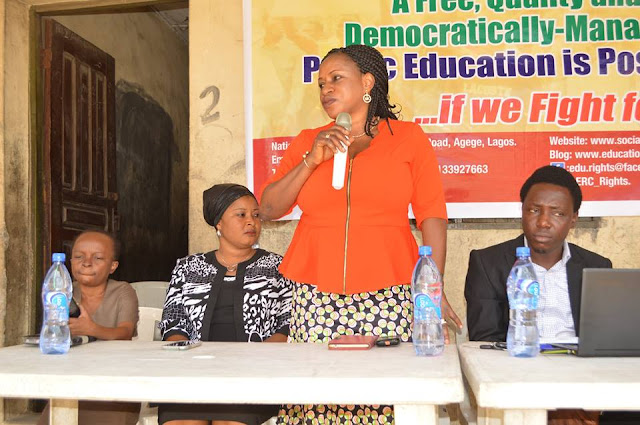 According to Mrs. Olosanya, public education rest on the shoulder of government and there is no way the government can shy away from its responsibility. Other speakers who spoke on the same topic acknowledged the importance of education and applauded the efforts of the ERC Free holiday coaching. The ERC national coordinator, Hassan Taiwo Soweto categorically stated that the challenges and problems of primary and secondary education is not far-fetched from the reality of underfunding, inadequate facilities and infrastructures, not enough teaching staff etc. He called for better funding of the education system. According to him, if public resources are democratically managed, the issue of corruption would in no way arise. But because of capitalism and the false mantra that “government alone cannot fund education”; that is why the neo-liberal agenda of commercialization and privatization became the hallmark of government education policy. The consequence of course is the paralysis and near-collapse of the whole public education system.
Coming from the background and experience of the police, the representative of the DPO urged the students to take their academic very serious. He also spoke about social vices which young people participate in and also fall victim too. Particularly, he spoke extensively about rape and sexual harassment which many young girls fall victim to in the communities. While declaring the police readiness to deal decisively with crime and insecurity, he announced police emergency lines which he encouraged the students to always call should they ever be in any emergency situation. He ended by urging the students who have participated in the ERC lesson read their books always and stay away from the distraction and social vices.

While the coaching was on, Paradigm Initiative of Nigeria (PIN) – an initiative of the alumni of a computer training school – supported the coaching by training students in SS 2 and SS 3 classes in computer operation and skills. The training ran for five days before the closing ceremony. At the closing ceremony, PIN members came to award scholarships to five students. This scholarship automatically provides the five students an opportunity to attend a six-week computer programme free of charge.
Also the volunteer teachers, about 30 of them, were each awarded ERC certificate of participation. But the best award of all was the standing ovation and resounding applause each got from grateful students and parents as they stepped forward to receive the certificates.