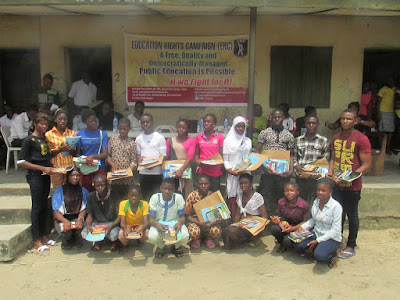 Awards were issued out to students who did well in the mock examination conducted on 3rd, 4th and 7th September, 2015. These examinations were set to test the students who participated in the coaching. After results were released, the following students listed below did admirably well and were consequently deemed deserving of special awards:


Also, students were awarded in other areas like punctuality and regularity in attending the classes during the whole six weeks of the coaching. They are:

While the coaching was on, Paradigm Initiative of Nigeria (PIN) – an initiative of the alumni of a computer training school – supported the coaching by training students in SS 2 and SS 3 classes in computer operation and skills. The training ran for five days before the closing ceremony. At the closing ceremony, PIN members came to award scholarships to five students. This scholarship automatically provides the five students an opportunity to attend a six-week computer programme free of charge. Those awarded with scholarships are: