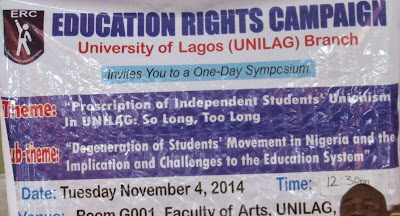 The Education Rights Campaign (ERC), University of Lagos (UNILAG) chapter, held a public symposium on the 4th of November, 2014, at Faculty of Arts of the university, with the theme “Proscription of independent student unionism in UNILAG, So long, too long and the topic “Degeneration of students movement in Nigeria and the implications and challenges to the Education system”.


The symposium had in attendance Dr Dele Ashiru, a lecturer and a former president, Student Union UNILAG, Abiodun Aremu, Secretary Joint Action Front (JAF), H.T Soweto, the National Coordinator of the Education Rights Campaign (ERC), Mr Siraj a member of the Students Union Constitution Drafting Committee (CDC) set up by the management, and some other student activists. Close to 50 students were in attendance. For a campus which had experienced little or no political activity since the ban of the Students Union about 10 years ago, this is an inspiring turnout.

The symposium commenced with the reawakening of students consciousness, with the chanting of solidarity songs. Abiodun Aremu highlighted  the purpose of education in the society, and the urgent need for students to have their union back so as to be able to ask questions, defend their rights and if need be challenge authorities when these rights are infringed. Thereafter, he pointed out that it is irresponsible of any university system to deny students of unionism.

Dr Dele Ashiru in his own speech, outlined the necessary qualities a student union must possess to be relevant in the society. He stated that students must be knowledge-driven and engage in critical skepticism, i.e. doubt everything. He noted that knowledge-driven activism produced the National Association of Nigerian Students (NANS) Charter of Demands on education. According to him, opportunism must be removed, stating that characters parading themselves as activists meanwhile they are opportunists need to be removed from the system. Quest for material benefits in the name of student activism or leadership must also be eschewed. He recalled a situation where a representative of one of the halls at a meeting asked about how much their sitting allowance would be.

He enjoined students to all work assiduously to make sure that the union when it is restored is a well equipped one. He pointed that the union should be free of tribal or religious differences. He also made it clearly known that the Academic Staff Union of Universities (ASUU) would stand with the students in ensuring that the Students Union is brought back soonest.

HT Soweto also spoke, imploring students to be determined at getting back the Student Union. He however pointed out that students should not just want any union, but one which is independent, mass-based and democratic. He pointed out that the rule or idea inserted into the new union constitution disenfranchising thousands of students from directly electing their representatives is more or less like returning UNILAG to the period of military autocracy. He stated that the idea of the Electoral College should not be a basis for election into union offices. Only mass participatory election can ensure the union is one that is accountable to students. He also explained that the higher institution is a place where rudiments of leadership is instilled in students who are future leaders so the illegitimate ban on the Students Union should be lifted soon and students should be allow to run their affairs their own way.

He also enjoined students to see themselves as capable of mobilizing to right these wrongs by saying no to Electoral College and to ensure that this current transition is fully achieved. In all, he pointed that students should make it a point of duty to attend in their mass the constitutional review taking place on Friday November 7 so as to push their demands for the immediate setting up of an electoral commission and release of election timetable.

The representative of the Constitution Drafting Committee (CDC), Mr Siraj, quickly explained to students on how the CDC was composed, the activities they embarked on before and during the constitution drafting and on the Electoral College, how it came about, the composition and the idea behind it. He explained that though he himself does not support it, nevertheless students should accept it for the sake of ensuring the union is restored after which students can on their own remove it from the constitution.


In conclusion, Dr Dele Ashiru commended the ERC, UNILAG chapter, suggesting that more symposium of this nature be organised so as to resuscitate students’ consciousness on campus and to help in ensuring that students stand for what is right, and also speed up the return of a student oriented, UNILAG Students Union (ULSU). At the end of the inspiring discussion, about 21 students signed up to join the ERC.
Posted by Education Rights Campaign (ERC) at 15:30