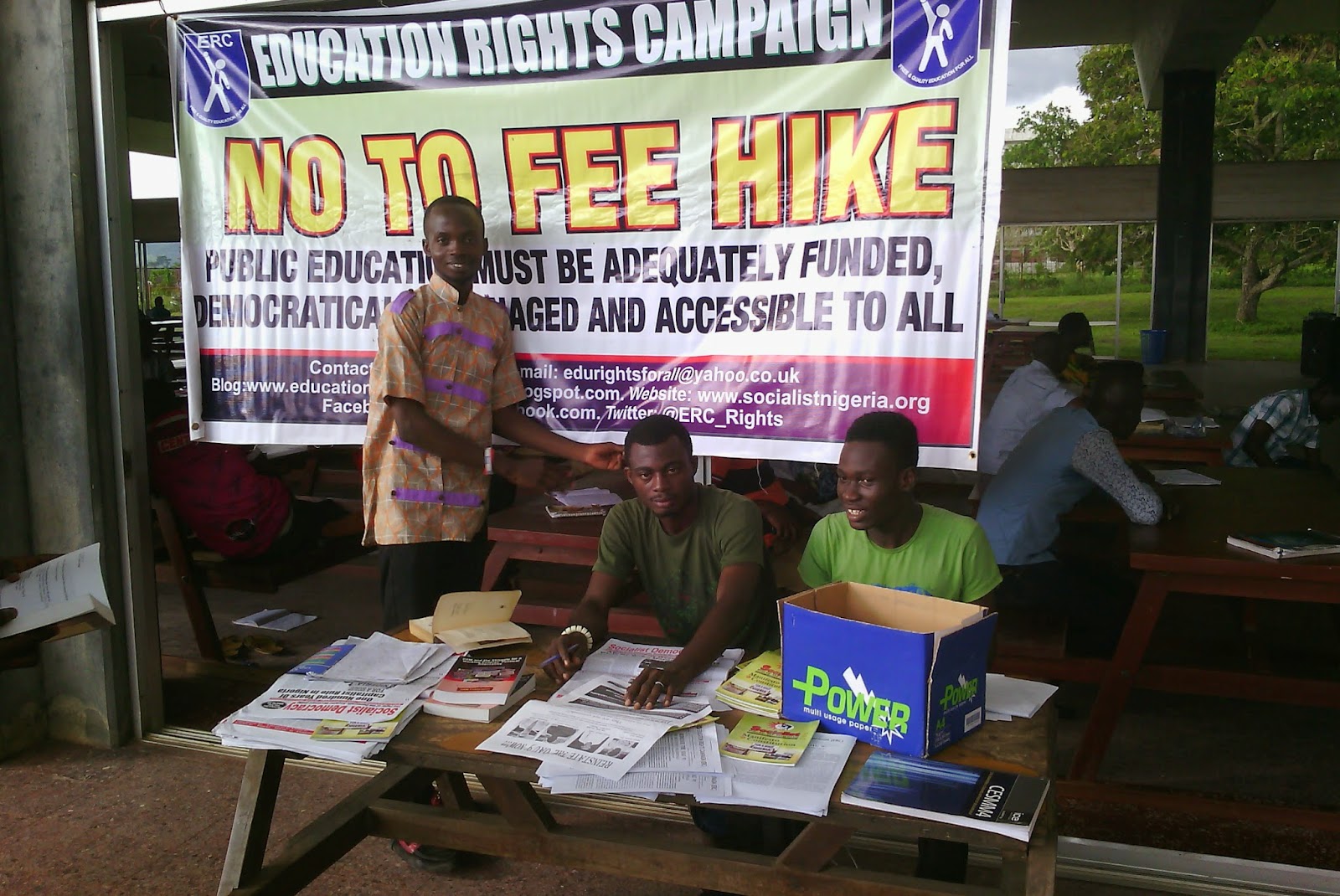 The Education Rights Campaign (ERC), Obafemi Awolowo University (OAU) Branch held a public symposium on Friday, 7th November 2014 to discuss issues ranging from anti-students’ attacks to the moribund state of the students’ movement. The speakers – Prof. Josiah Ajiboye (Chairman, Academic Staff Union of Universities (ASUU)-University of Ibadan Chapter), Kola Ibrahim (Secretary, Democratic Socialist Movement, Osun-State), Dr. Kehinde Ajila (Former Executive member, ASUU-OAU) and Olawale Owolabi (Student activist, who has been under suspension order for his roles in students’ struggle of February 2011) – took their turn to lead discussions on these issues. The programme started around 3.30 p.m.
Opening the floor, Olawale Owolabi highlighted the degeneration of the Great-Ife Students’ Union and proffered the need for students to reclaim and put their union under their democratic control. “In as much as students have fought gallantly for the restoration of the union in the past three years, then your struggle must not end there,” he pointed out. It is necessary for students to also clamor for, and defend the independence and vibrancy of their union.  His speech clearly described the state of the Students’ Union in OAU, where the leadership of the Students’ Union, having compromised during the struggle of students against fee hike in May/June, is resisting the pressure of students for a congress – which it fears might bring about its waterloo.


Subsequently, Prof. Josiah Ajiboye took to the podium to inspire students on the need to organize and struggle, instead of being deceived and cowed by pro-establishment management. He appreciated the efforts of the Education Rights Campaign (ERC) in the LASU struggle, and admonished OAU students to follow the LASU example. For him, managements and governments can be forced to improve quality of education based on the intensity of struggle. This, according to him, has been proved by the victories of the ASUU 2013 strike and the LASU 2014 struggle. He condemned the actions of the OAU management on the suspension of eight student activists, and informed the gathering that the case of the suspended students would be taken up at the level of ASUU.


During this period, the symposium observed a minute silence in the memory of the late Prof. Festus Iyayi, who died during the ASUU 2013 struggle.


While rounding off, the ASUU leader argued that the plethora of political parties in the country currently are “the same fingers of a leprous hand”, and can never offer the people significant change. The activities of politicians misruling Nigeria, for him, have further deepened the gap between the poor and the rich, presenting society as a class of few rich and majority poor. He said, the way forward from this mess is that “we unite to fight, instead of staying divided to beg.”While taking her turn to speak, Dr Kehinde Ajila also praised student effort and expressed her profound satisfaction with the improved consciousness of the students. Of course, she took into account the bold resistance of students during their struggle against fee hike. She however encouraged students to reclaim the dimming glory of their union.


Kola Ibrahim, while speaking expressed disgust on the general conditions of students, and charged students to get organized and demand improvement. In his view, the attacks on students, as well as the suspension of eight student activists, demand that students should gather and discuss their general conditions. Flowing from Ajiboye’s condemnation of Nigerian political system, Kola Ibrahim posited that only a socialist transformation can bring Nigeria out of this current absurdity.


He linked the crisis in the education sector, vis-à-vis growing commercialization of education and attack on students’ rights with the backward neo-liberal, neo-colonial capitalist arrangement in the country. He mentioned the fact that the working people need a new political party of their own and should stop voting their enemies to power. While underscoring the sameness of the main bourgeois parties, he stated that the DSM has initiated a new party of the working and oppressed people, the Socialist Party of Nigeria (SPN) to provide the political pillar for those seeking genuine change. He charged the students to build left-wing organizations on campus as a counterweight to degeneracy in student movement. 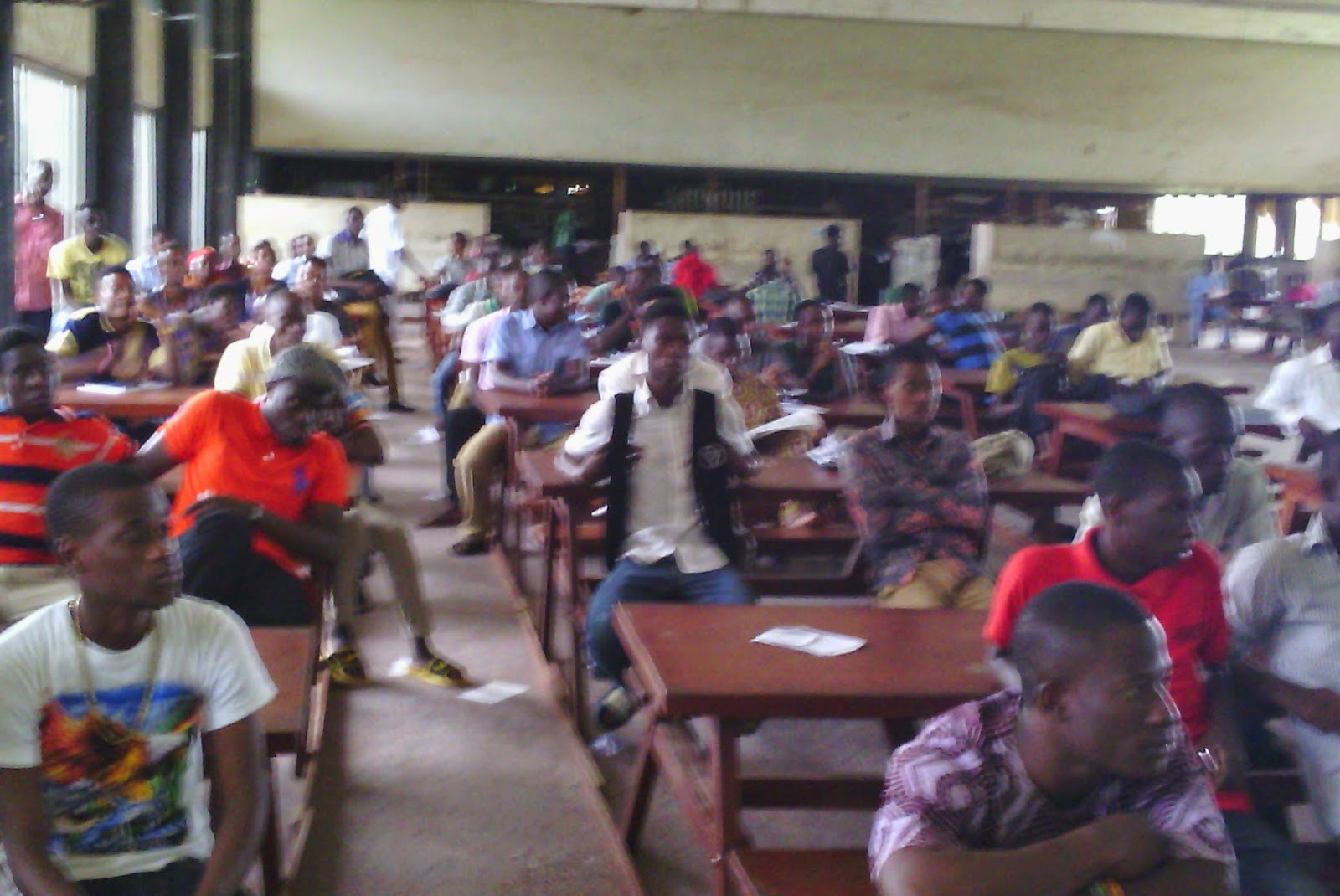 A former student activist, Olorunwa Goddey also made solidarity speech, highlighting the rich progressive history of OAU student unionism and charging students to reclaim their union as a fighting platform. Other victimized students activists also made inspiring solidarity speeches, which were well received by students.


There were also contributions from students after these thought-provoking speeches. In all, over one hundred and fifty (150) students participated in this symposium. Seven hundred Naira worth of DSM and ERC publications were sold at the symposium.


At the time of writing this report, it was obvious that the symposium had left its mark on the consciousness of students. On Monday, 9th November, 2014, residents of the Awolowo Hall converged to elect their hall executives in defiance of the university management.