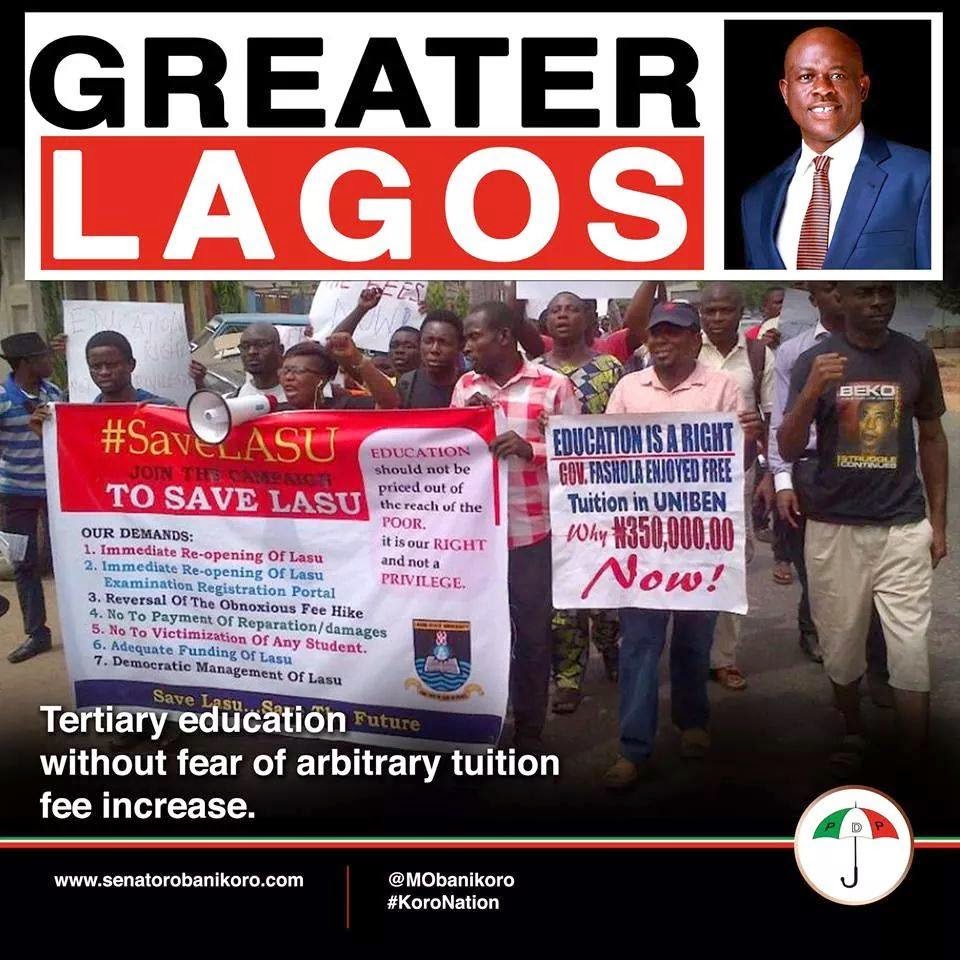 Our attention has been drawn to the usage by Senator Musiliu Obanikoro of a picture on his official facebook page and twitter handle. This picture which has been designed as part of the social media materials to campaign for his political aspirations in Lagos State shows students, leaders of the Education Rights Campaign (ERC) and civil society activists marching behind a #SaveLASU banner and calling for the reversal of fee hike at the Lagos State University (LASU).

We will like to expressly dissociate the Education Rights Campaign (ERC) from Senator Musiliu Obanikoro’s political aspirations and campaign and/or any other misrepresentations of ourselves that the usage of our picture in his campaign materials conveys.

From our record, the said picture is that of the first protest march to the State House of Assembly on February 18, 2014 organized by the #SaveLASU Campaign Movement – a coalition formed by the ERC, Lagos State University Students Union, National Union of Lagos State Students (NULASS) and other radical groups.

We recognize the right of everyone including Senator Musiliu Obanikoro to make use pictures of public events including protests such as everyone does whether on social media or other platforms. However caution and restraint is required especially when usage of certain pictures or images could create wrong impressions including encouraging political interpretations that may not be in the best interest of the organizations and individuals depicted in the image.

By using this picture which has the banner of the movement as well as faces of the leadership of the ERC as well as other civil society activists, the impression could be created that perhaps the ERC and other initiators of the #SaveLASU movement are supportive of Senator Obanikoro’s political aspirations.

It is therefore imperative that we again reiterate the fact that both during and after the victorious struggle for reversal of LASU fee hike, the ERC has never failed to stress the fact that neither the All Progressive Congress (APC) or the People’s Democratic Party (PDP) can truly and genuinely guarantee the provision of a properly funded and democratically managed public education.

We canvass this position because both political parties subscribe to the same anti-poor capitalist philosophy of privatization and the commercialization which are responsible for the pricing of education out of the reach of the poor. This explains why even as the struggle to reverse LASU fees raged, the PDP-led Federal Government was busy presiding over hike in fees at Federal Universities like the Obafemi Awolowo University (OAU) Ile-Ife. Last year, public universities were shut for six months because lecturers downed tools when Federal government failed to implement agreements with them. Today, and despite closure for about year, the threat of further disruption is still hanging over public polytechnics and colleges of education like the sword of Damocles.

From this background, it should be clear to anyone that neither the PDP nor the APC stands for anything fundamentally different. A victory for either political parties in the 2015 elections will most definitely  result into further privatization and commercialization of education at all levels and increase of fees. It is for this same reason that the ERC cannot offer support for either the PDP and the APC or any of their candidates in the forthcoming 2015 general elections.

In any case we believe that a new political party that represents the interests of workers, youths and the poor need to be built to take political power not only in Lagos state but in the entire country. This is why we have pitched our tent with the Socialist Party of Nigeria (SPN) – a new political party which is presently challenging the Independent National Electoral Commission (INEC) in court for its registration. The absence of a genuine political party of the workers and poor masses is why politicians like Senator Musiliu Obanikoro are bold enough to attempt to cleverly use the struggle of the people to further their own political aspirations.

Whether the SPN’s struggle for registration as a political party is concluded or not by the time of the 2015 general elections, genuine Socialists will continue to fight for the emergence of a working people’s political alternative party in order to achieve a permanent economic and political respite for the working and poor people. We enjoin all those who participated in the struggle for the reversal of LASU fees and equally all those who are inspired by this victorious struggle to join us to forge a political weapon to take control of our country from the capitalist marauders.