President Goodluck Jonathan’s appearance in Obafemi Awolowo University, Ile-Ife, on 28th November, 2014, was met with protest of students expressing their dissatisfaction with the anti-poor capitalist programmes and policies of the Nigerian ruling elites.

The President had come to meet with traditional rulers in the South-West, who were to later endorse him for re-election in the 2015 general elections. The meeting as well as the participation of Goodluck Jonathan was kept as a closed secret, probably to prevent the reaction of students to the anti-poor character of the Jonathan’s administration. 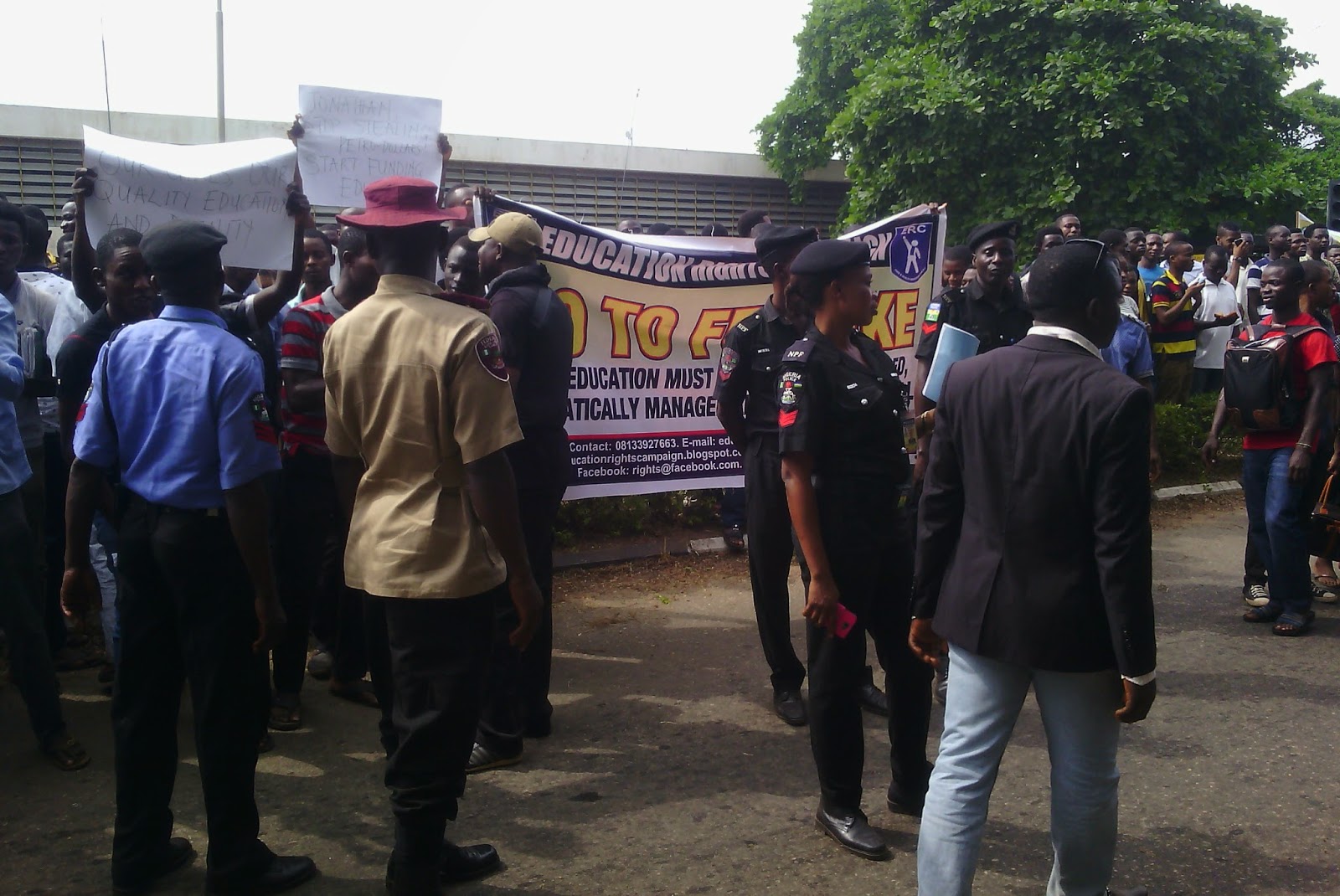 Nevertheless, radical organizations like the Education Rights Campaign (ERC), Democratic Socialist Movement (DSM), Pacesetters Movement and Socialist Youth League (SYL) mobilized mass of students to Oduduwa Hall, the venue of this meeting. Despite the fact that students are currently writing their semester’s examination and the impromptu character of this mobilization, over two thousand of students heeded the call for a massive protest action to ‘welcome’ Goodluck Jonathan.

The campus of the university, especially the ‘Road One’ major link road, was stacked with legions of heavily armed operatives of the Nigerian Army, Air Force and Police Force. This caused students who are writing examination a lot of hardships as commercial buses were not allowed entrance too. This only further heightened the anger of students. 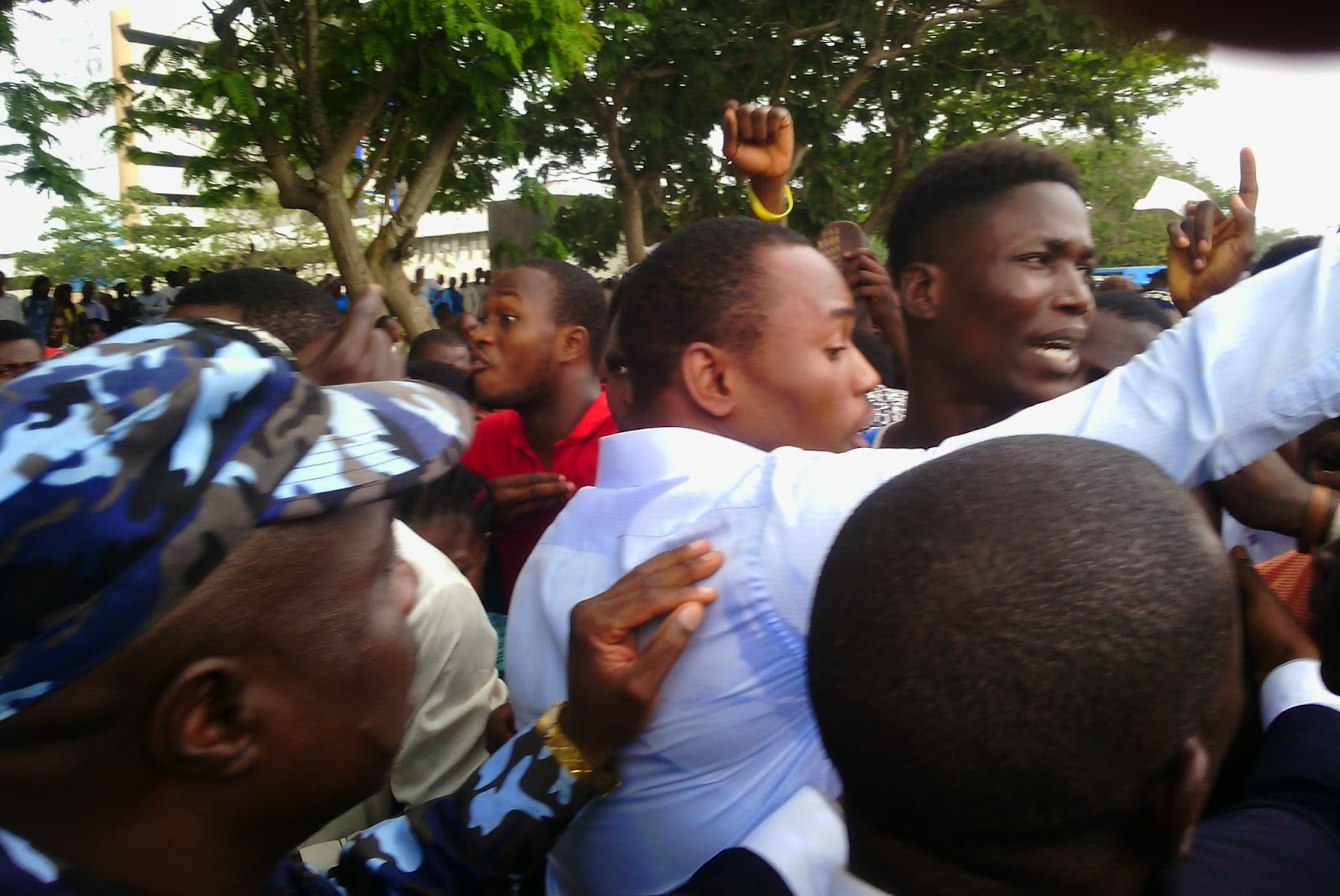 Against the background of this heavy military presence, students defied the gun totting security operatives and went on with their organized demonstration. The banner of the Education Rights’ Campaign (ERC) with a bold inscription of “NO TO FEE HIKE” was at the front of the protest. Placards were raised by students with several sharp inscriptions bearing their demands for appropriate funding of education sector, reversal of hiked fees in OAU as well as the reinstatement of the nine suspended student activists in the institution. Some of the inscriptions on the raised placards read thus: “STOP STEALING PETRO-DOLLARS, START FUNDING EDUCATION”; “PDP=LOOTERS, APC: FRAUDSTERS, LP: SCAMMERS; FOR A PEOPLE’S GOVERNMENT NOW!”; WE CONDEMN JOS KILLINGS, STUDENTS ARE NOT CHICKENS”; “JONATHAN, DON’T SELL EDUCATION AS YOU SOLD ELECTRICITY”; “IMPLEMENT ASUU 09/13 AGREEMENTS, NOT IMF/WORLD BANK POLICIES”; “REINSTATE OAU-9, THEY ARE NOT CRIMINALS”.

Instead of applause, President Jonathan as well as the Obas were received with chants of ‘Ole’ - the Yoruba word for ‘thieves!’. This chant filled the air as a Governor, several traditional rulers and serving ministers drove to the venue of the meeting. It was obvious that students were dispassionate in expressing their dissatisfaction and did not treat anyone as a sacred cow. 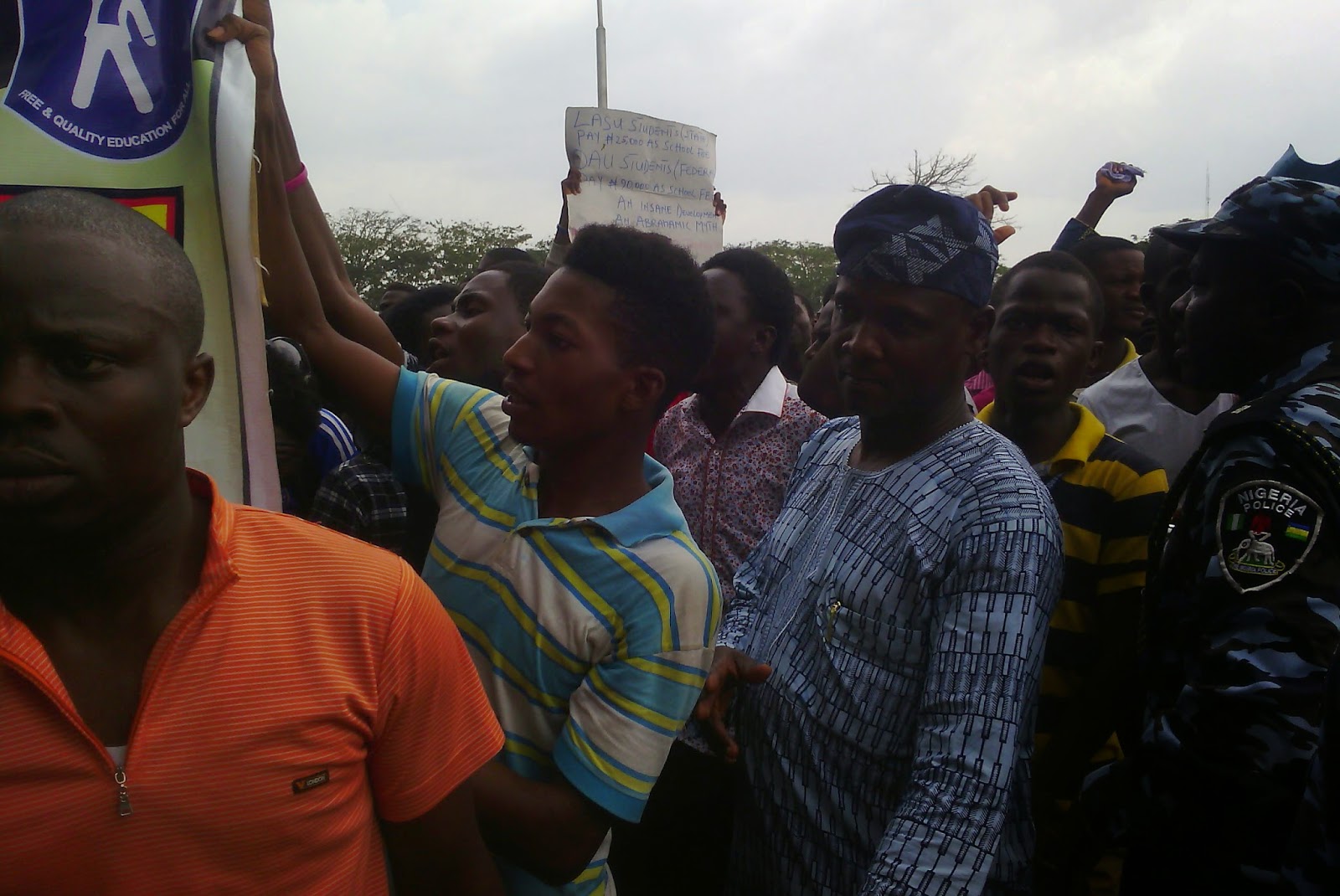 The high point of the demonstration was when students reacted to some individuals, who had been contracted to display banners expressing support for the Peoples Democratic Party (PDP) and politicians aspiring for offices in the 2015 general elections. Chants of “NO CAMPAIGN!” rented the air, as students angrily told them to drop their banners and posters. The mass of students were able to exercise their authority and prevented these individuals from tainting the character of the demonstration as they seized several banners and posters. This clearly shows the mood of the protesters to the pro-capitalist political parties in the country.

At several points, security operatives and agents of the embattled politicians attempted to distract the crowds. Some suggested that the protesters should disperse and that the President of OAU Students’ Union would discuss with Jonathan. Students swiftly rejected this on the basis that the Students’ Union President did not deem it fit to mobilize them out in the first instance. Attempt by the union president to divide the crowd was futile as the mass of students booed him from every direction.

Some student activists also took time to address the protesters. Oduntan Ahmed, the Clerk of the Students’ Union parliament told the students that the demonstration treats PDP as well as APC alike, because they are all the same in their neo-liberal attacks against the people. H.T. Soweto, the National Coordinator of Education Rights Campaign (ERC), who was present at the demonstration, praised the action of students and encouraged students to give the capitalist ruling elites the cold welcome they deserve.

At the end of the meeting when the President, politicians and traditional rulers made to leave, the protest peaked. For about 30 minutes, students barricaded the roads linking the venue of the meeting to the major roads. All were stuck in the barricade. The President was eventually smuggled out, angry crowds raced after him to the Sport Complex of the University, where he was to board a chopper. 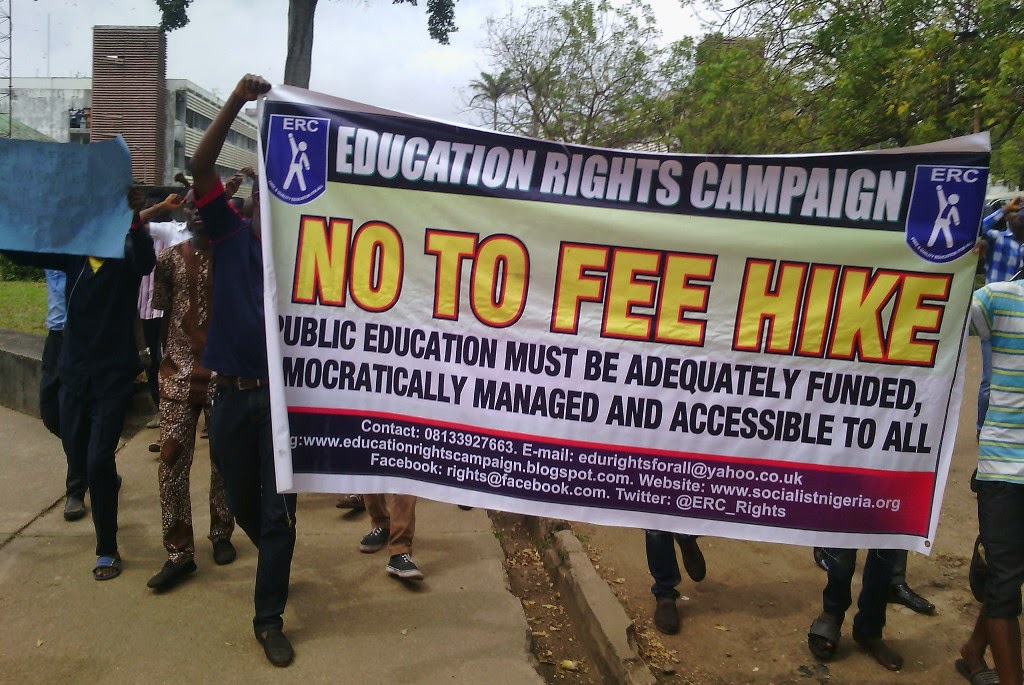 Against the background of a pro-establishment students’ union leadership, students of Obafemi Awolowo University were able to maintain the age-long tradition of their students’ union which does not celebrate anti-poor politicians, irrespective of their status or party affiliations. The roles of left organization such as DSM, ERC Pacesetters, SYL cannot be overestimated in the sustenance of this value, as has been demonstrated by the Friday’s action organized by the groups.

One point has been stressed in the Friday’s demonstration and it is that students and youths are seething with anger at the various attacks from the Nigerian ruling elites, and will take any platform to ventilate that. Now there is a need to build on this anger a movement that can begin to mobilize for a fight for an end to attacks on public education, reversal of fees, improved funding etc. This becomes urgent given the austerity measures in the offing as a result of decline in Nigeria's earnings from crude oil sale. The ERC is calling for a one-day nationwide lecture boycott of students to send a signal that austerity will be resisted.
Posted by Education Rights Campaign (ERC) at 23:21