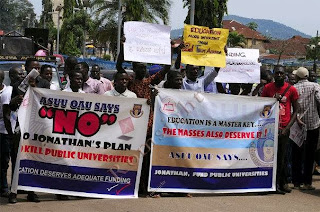 On 21st October, 2013, the Obafemi Awolowo University (OAU) Ile-Ife Chapter of ASUU organised a protest rally to sensitise the public on the crisis rocking the education sector and the lingering ASUU strike. This is part of various rallies organized by ASUU local branches across the country. The rally started from the university gate amid heavy presence of police men and other security operatives. Indeed, the whole town was taken over by the police, with police at various strategic spots of the town.

Despite this heavily militarized atmosphere, the rally started with about one hundred, mostly made of lecturers. A few numbers of student and youth’s activists were also present to solidarise with the striking lecturers. Members of the ERC and DSM from the Osun State chapter also participated in this rally with several copies of leaflets. The size of this protest reflects that rank and file members of ASUU supports the present strike and are ready to struggle to prosecute it to a logical conclusion. What is needed now is for the leadership to tap into this current with consistently organised mass activities.

The protest procession started at the university gate with speech from the chairman of the ASUU, OAU branch, highlighting the insincerity of the government and its misplaced priorities. From afar, passers-by, traders, youth, and even children easily comprehended the focus and demands of the protest. This was made possible with the boldly written demands on placards and leaflets in Yoruba and English languages. The placards carried various demands on the government on the need to adequately fund public education.

While the procession passed through major roads in Ile-Ife, it stopped at some populated junctions to address crowds on the purpose of the rally. Various ASUU members and activists took turn to address the crowd in pidgin-English, Yoruba, Hausa and English languages.

Prof. Awopetu, a former Chairman of ASUU-OAU branch, while addressing the public in Yoruba language, reminded them that the current battle between the teachers and government on proper funding of education has been drawn since the 80s. Continuing, he said “the only thing government has been doing to help the situation is insincerity; insincerity to fund good education for the poor masses who can’t afford oversea education… The public should also know that anytime ASUU is on strike, lecturers just like anybody do not benefit from it…But the public has to keep supporting us so that our education can be repositioned”. In the same vein, a Professor from Agricultural Sciences who addressed the crowd at the popular Lagere junction emphasized on the rotten state of education facilities and infrastructure in the country. In his words, “…as a student of Agric, I used more than 20 cows for my final year project in OAU, but it is pitiable that the OAU farm has less than 20 cows for all Agric students today…and this shows the decline in our education system.”

Majority of the public including market women, artisans, etc received the messages of the lecturers positively. Indeed, there was mass outburst against the government at all levels. The people, who listened sympathetically to the case of the lecturers, were fast at blaming the government for the woes bedeviling the education sector. A market woman during one of the speeches interjected “I still do not have enough money to send my kids to public schools not to speak of considering the private school options.” Others assured the lecturers of support and prayed continuously for them during the whole event.

During all this period, members of the DSM and ERC were noticeably present at the procession with our papers – copies of the Socialist Democracy – which were well displayed and bought by some of the lecturers and members of the public. About 20 copies of Socialist Democracy (the paper of the Democratic Socialist Movement) were sold, some were even bought at solidarity prices. However, the intervention of the ERC at this protest would have been more concrete if not for the conditions the police gave the lecturers before police accepted to allow the protest to hold without police disruption.

The rally and the response it got, not only among ASUU members but by the general public further underscores the correctness of the position of the DSM and ERC that unless ASUU organize mass actions including street protests and rallies, the general public, who are affected by and ready to defend education, will be isolated from the struggle. We again call on ASUU to move this forward by calling national day of protests and rallies, by reaching out to other strata of the working and oppressed class. It is with this approach that government will be isolated completely, and forced to concede. This is necessary so that ASUU will not be portraying a messianic image, while other sections of workers become bystanders.

This was borne out of the OAU rally. Despite the positive relationship among staff unions on campus, members and leadership of other staff unions like NASU, SSANU and NAAT were not consciously mobilized. If this had been done, there would have been massive response. It was ironic that while ASUU is protesting at the gate on education underfunding, members of others unions were working inside the campus! Of course, leadership of the rally when this was raised with them, claimed that the policemen, acting as agents of Jonathan repressive state, tried to gag the protest and prevent mass involvement, but the police could not have stopped people from joining. This is also calling on other unions not only in the education sector, but in other sector to take practical solidarity steps through solidarity strikes and mass rallies. We also call on ASUU to reach out to other layers to move the struggle forward. Even with this police highhandedness, the ASUU-OAU organised protest was successful and efficient in its effect.