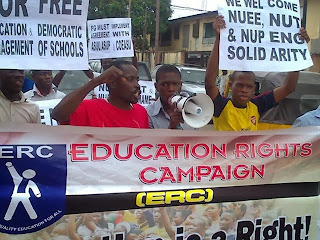 Members of the Education Rights Campaign (ERC) and other layers of student activists embarked on a lobby action on 24th October, 2013. The lobby action which was primarily meant to put pressure on NUT, NUEE, and NUPENG in naming a day of mass action following their recent threats issued some weeks ago on embarking on a solidarity strike with the striking ASUU and ASUP members. The action which was started at about 10am at the front of NUPENG office, Yaba, Lagos state with 15 comrades and 6 press men proceeded to NUT office, Lagos State wing.

The action started with solidarity songs, followed by speech from ERC Deputy coordinator, Lateef Adams, to introduce why the lobby action has to take place, which he mentioned in his speech that it is to raise the tempo of the on- going struggle to save public education and to mount political pressure on the three unions (NUT, NUEE, NUPENG) that declared support for ASUU and ASUP strike in naming a day for their solidarity strike.

H T Soweto in his own address emphasized that the union members are the parents of the students at the suffering edge so there is a need for the unions (NUT, NUEE and NUPENG)  to declare a day for their solidarity strike to join the striking education workers in saving public education from total collapse. He also called the attention of the public to the recent armoured car scam by the Minister of Aviation, Stella Oduah, who bought two bullet proof cars for her personal usage with $1.6 million public funds. It is needful to immediately state that the leadership of NUPENG whom we first visited refused to openly address us. But a copy of ERC open letter to NUPENG was submitted and received at NUPENG. 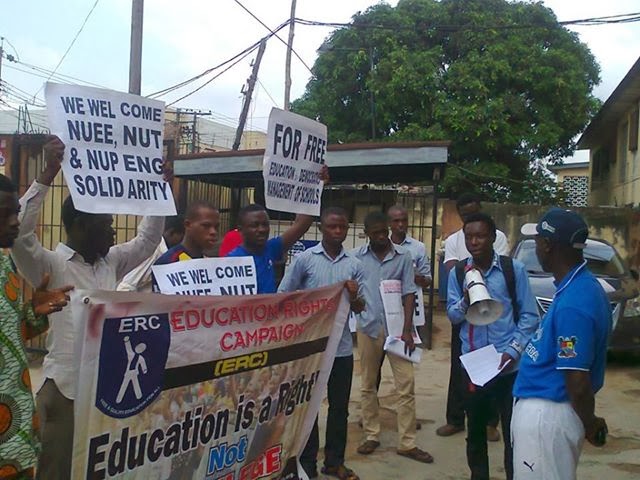 The lobby action then marched forward to the NUT office, Lagos State wing, where we were welcomed by the deputy chairman of the union, Adedoyin Adesina. Com. Lateef Adams gave a the reason for the solidarity visit and the need for more action from the union to save the collapsing public education sector. Com Soweto started his speech by appreciating the warm reception by the union. While condemning the attitude of the FG reneging on a signed agreement with education workers, he emphatically called on the leadership of NUTto name a day for their solidarity strike  which can compel the federal government to implement the agreements signed with ASUU and ASUP and other education workers. 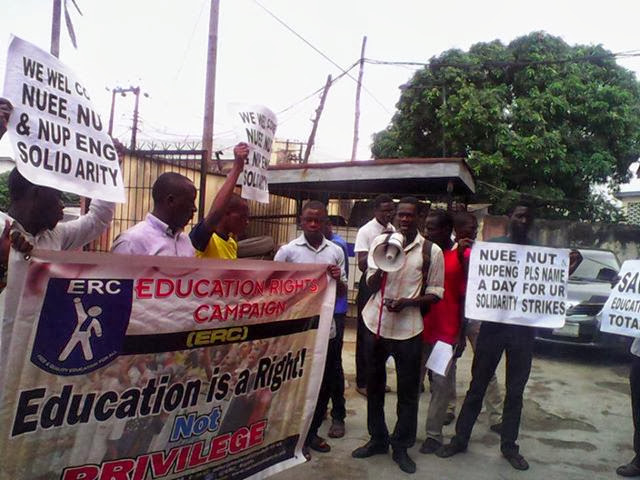 Soweto urged the NUT to cooperate with other sister workers’ unions to save the public education and join the fight for free quality education at all levels. The NUT Lagos state deputy chairman in his own remark, appreciated the solidarity visit of ERC, roles played by the organisation in the student movement. He also apologized on behalf of the union chairman who promised to be present but who was unavoidably absent.

He further condemned the role play by the FG on the ongoing strike and promise to deliver ERC message to the appropriate quarter.

This was immediately followed with a brief meeting on recent development regarding the adopted activities of ERC. Soweto highlighted the change in date for the proposed town hall meeting. ERC town hall meeting was originally slated to hold on November 7th at NLC secretariat, Yaba, but unfortunately the date coincides with the annual KOLAGBODI MEMORIAL LECTURE. It was thereby agreed that the date should be shifted to November 9th and the KOLAGBODI MEMORIAL LECTURE should be used to mobilize activists and civil society organisations that will participating at the memorial lecture for the town hall meeting of 9th November.