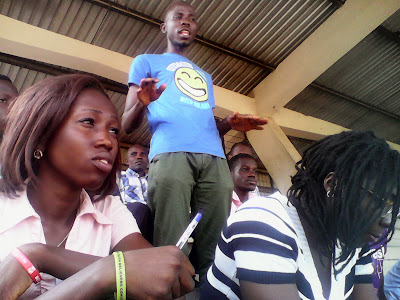 The lead off was by HT Soweto, national coordinator of ERC. Discussing on the overall crises in the Nigeria public education sector, he analyzed the attack on the education sector and the need for fight back. According to him the ongoing ASUU and ASUP strikes are worth supporting by students, parents and general public because they are meant to compel government to fund public education. He further mentioned the statement released to the media by some unions (NUT, NUEE, and NUPENG) who threatened to embark on a solidarity strike with ASUU but yet to name a day of action to actualize their solidarity strike. He also encouraged students to struggle alongside with the striking unions (ASUU AND ASUP) in the struggle to save public education.

Reacting to the lead off, Seliat from OOU raised the need for more actions to further fight for the liberation of public education from the ruling elites. She specially emphasized on the need to rally round the generality of the ordinary Nigerian students at various tertiary institutions for bigger mass actions on the street. Lateef from UNILAG also drew attention to the main cause of education crisis in Nigeria. Stating that capitalist system and ideology adopted by the ruling elite has outlived its purposes and the need to replace it with socialism as the only alternative is urgently needed. He further encouraged students to be active in all struggles geared towards saving public education.  In his comment, Tope, SUG president of Federal University of Agriculture, Abeokuta, (FUNAB), identified the unification of the ruling elite against the poor masses which further raises the need for more action in fighting back and compel federal government honouring ASUU and ASUP agreements. 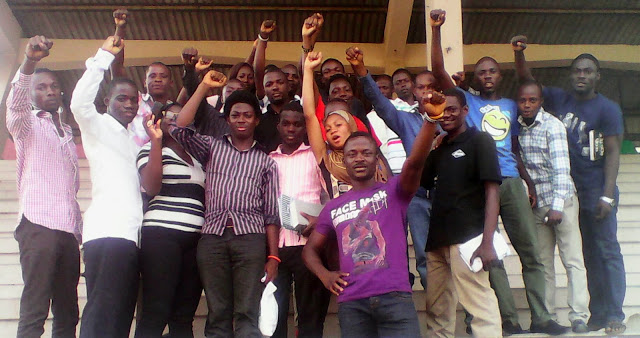 The ERC proposed planned actions were introduced by Michael, national secretary of ERC. He gave the breakdown of the proposed planned activities; the lobby action to NUT, NUPENG, NUEE, office on 24th of Oct 2013, the press conference on 30th Oct 2013 and town hall meeting on 7th Nov 2013. He encouraged activists present to play crucial roles to make the planned actions successful. Reacting to this, Modiu from UNILAG urged ERC to step up its activities in the student movement especially on proper and daily updates on ERC blog. Toluwo from UI in his own comment emphasized that ERC should have its own independent activities and not always involving or depending on NANS in all its programme and actions.

The report on increment in the acceptance fees of FUNAAB freshmen was given by the SUG president. In his report, he explained how astronomically the management of FUNAAB just increased the acceptance fees of freshers to N45,000, and the roles played by the union in fighting against the dastardly act of the university management. The meeting agreed to issue a statement to condemn the increment. Towards the end of the meeting a, 6- man committee was constituted to coordinate the proposed street rally of Oct 30th. They are: Lateef Adams, Tope, Yinka, Seliat, Benjamin and Dada Idris. It was agreed at the meeting that comrades are to converge at the front of NUPENG office at 9am on 24th Oct 2013 for the lobby action.