Thursday 11 September, 2014 marked the closing day of the 10th edition of the free summer coaching of the Education Rights Campaign (ERC). The coaching which is targetted at students in SS I, SS II and SS III classes has been on since 2005 and it is organized in one of the poorest working mass ghetto communities called Ajegunle in Lagos State. About 400 secondary school students participated in the coaching this year.

The coaching is an annual exercise organized in the community and it runs for six weeks. Attendance of students is often from different schools both public and private likewise. The coaching could not have been successful without our volunteer teachers taking different subjects. The closing ceremony of this year as usual included a symposium wherein the ERC canvassed the possibility of the provision of free public education at all levels. 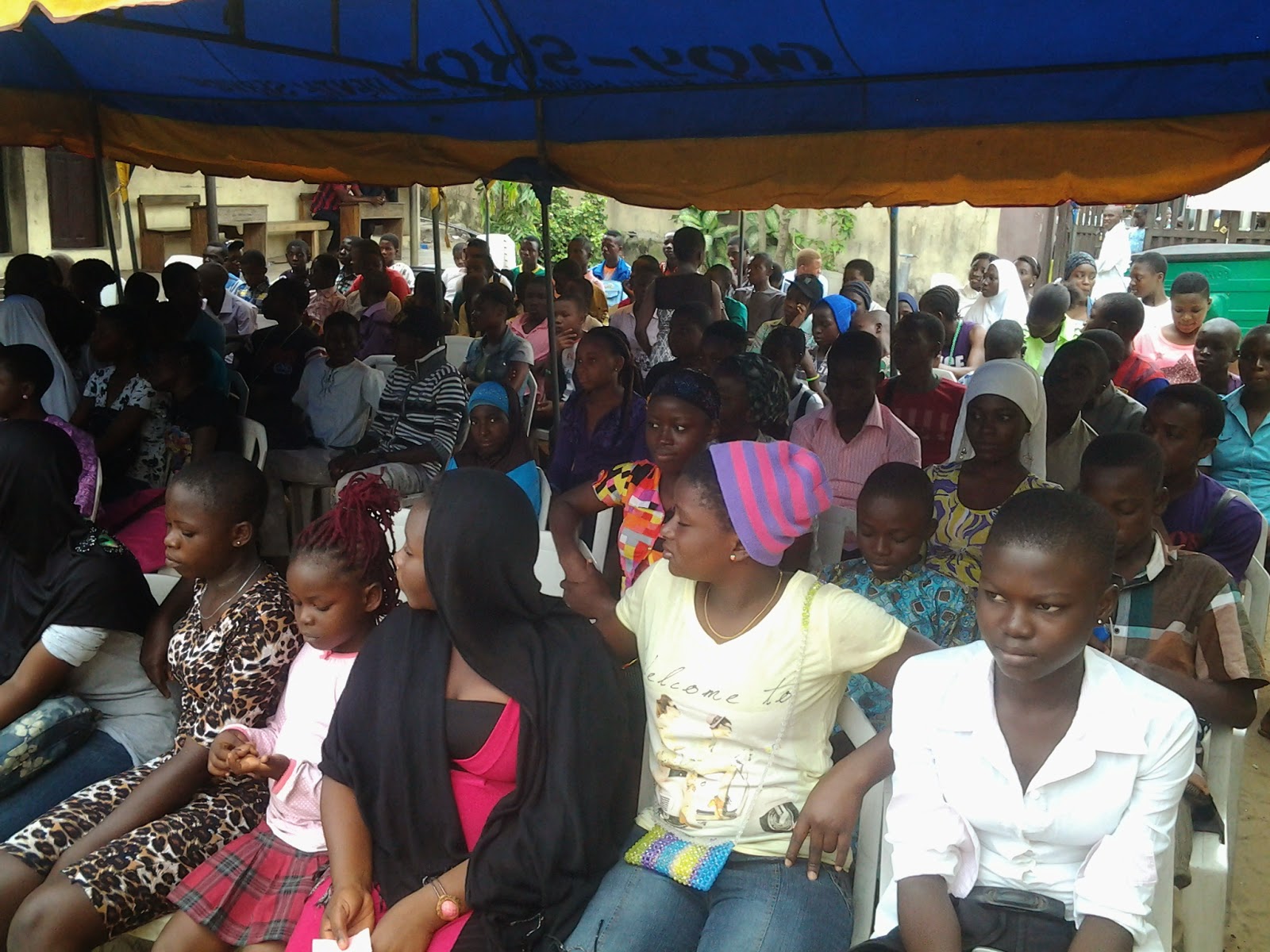 Speakers and guests like the Education Secretary of Ajeromi Ifelodun Local Government, Mr. Adewale Adeogun, the Headmistresses of Anglican Primary School, I and II, Mrs. Simeon D. C and Mrs. Ajayi A. O were invited. Also, the national coordinator of Education Rights Campaign, Hassan Taiwo Soweto, the chairman of the National Union of Teachers AJIF Dagga Tolar, the Lagos State Coordinator of Actionaid activista Morakinyo Abiodun and all donors to the closing ceremony were all invited to grace the occasion. The topic for this year's closing ceremony was "THE ROLE OF PUBLIC EDUCATION IN THE 21ST CENTURY."

The discussion started with Hassan Taiwo Soweto who talked about the crisis confronting public education. In his analysis, he said that public education has suffered terribly under the pro-capitalist government policies for past three decades. He pin-pointed specifically to the listening ears of the students that education is something that government should be ready to fund at all time. But the government of this country has decided to drag the flesh of education pitilessly on the ground with all kind of draconian polices that tends to make education the preserve of the rich.

For instance, he cited the case of the Lagos State University (LASU) - never mind the Fashola-led APC government school fee reduction recently as a result of mass struggle - where for the past three years, students from poor working class families have to pay through their nose to keep themselves in the academic system. Others have to drop out from school because of the high tuition fee that was inflated from N25,000 to N250,000 to N350,000. He made the students to understand by making the fact clear that the LASU fee reversal came as a result of the unrelenting fight of the students in-conjunction with ERC to force the government to reverse the tuition fee because education is a necessity to the development of the country.

This policy of fee hike, he categorically highlighted, shows the kind of government that does not want the children of the poor masses to have quality education in their life. He said the LASU case pinpoint how government, which he described to the students to be capitalist in nature and ideology, has been responsible to the decadence of education, dropping below standard in this country. Currently, he highlighted that in this 21st century, the level of illiteracy in this country is spreading like a plague. HT Soweto sharply highlighted the fact that more than 10 million children from the working poor class families arw out from school.

Fundamentally, he highlighted the fact that for illiteracy to eradicated, government has to not only fund education buts also ensure the privision of free education at all levels. Without injecting public fund into the educational sector, he continued, illiteracy will continue to grow above the level we are seeing now.  But this is fundamentally impossible under capitalism. This is one reason why we need to end capitalism and enthrone a socialist Nigeria.  With a socialist planned economy under the democratic control of the working masses, free and qualitative education is possible,

The NUT chairman of AJIF Dagga Tolar also participated in the debate. Dagga Tolar who is also a member of the Executive Committee of the Democratic Socialist Movement (DSM), challenged the students to see the scientific role of education in human society especially when government fund it adequately and appropriately.

Literarily, he made a solid point clear to the students that why the ruling elite of this country have decided to keep humanity in the dark especially the children of the working class is because they know that when educated, people can be difficult to enslave. According to Dagga, for the students to make any difference both academically and intellectually, they have to begin to take their academic very serious at all times because that is the only thing that will make huge difference in their lives. Also, it will put them in the position of understanding why the political economy of capitalism is incapable of taking humanity to the next level of advancement.

Books, he continued, should be seen by every student to be the only thing that will have to enlighten their minds against the ignorant myth that the class system of capitalism has created. Without this proper engagement which he highlighted to the students they will not be able to begin to explore the importance of correcting the mess our society has found itself.

Education has a lot of role to play in our lives. He points out to the students that education is their rights not something that they think the government is doing out of benevolence. He cited an instance to the students to better explain what he meant. The Tolu Complex (a complex that houses about 16 public secondary schools with thousands of students attending) shows the dilapidated nature of what education is like in Nigeria. But because of the lack of motivation on the part of government to build more schools with high standard technological equipment and at the same time employ more professional teachers to the sector; we still have the complex in this quagmire.

Never mind the philosophy of the Lagos State APC administration and their claims of funding education with the excuse of Eko Project, where some of the public schools were under rehabilitation; this is just shadow without real image. Factually, he told the students that they should not be cowed by such cheap philosophy. The Tolu Complex and all other schools they attend are case-studies for understanding the fraudulent nature of government excuses.

He further urged the students to never hands-off from engaging their mind with all necessary materials to enrich their intellect. That is the only way for them to cross the bridge and begin to understand why education is not something to do without in our society, and why the students should begin to fight for quality funded public education in Nigeria.

THE ALBUM OF ART

At the end of the speeches there was poetry performance presented by a literary group named AJ House of poetry titled: EDUCATION: THE ONLY LEGACY I HAVE. Also, there was poetry recitation presented by students likewise drama and jokes to grace the 10th edition of the coaching.
.
There were gifts and awards presented to the various students by the Education Secretary of AJIF: Adewale Adeogun. Also, certificate were presented to the volunteers teachers who had given their time to teach for the whole six weeks the exercise lasted,