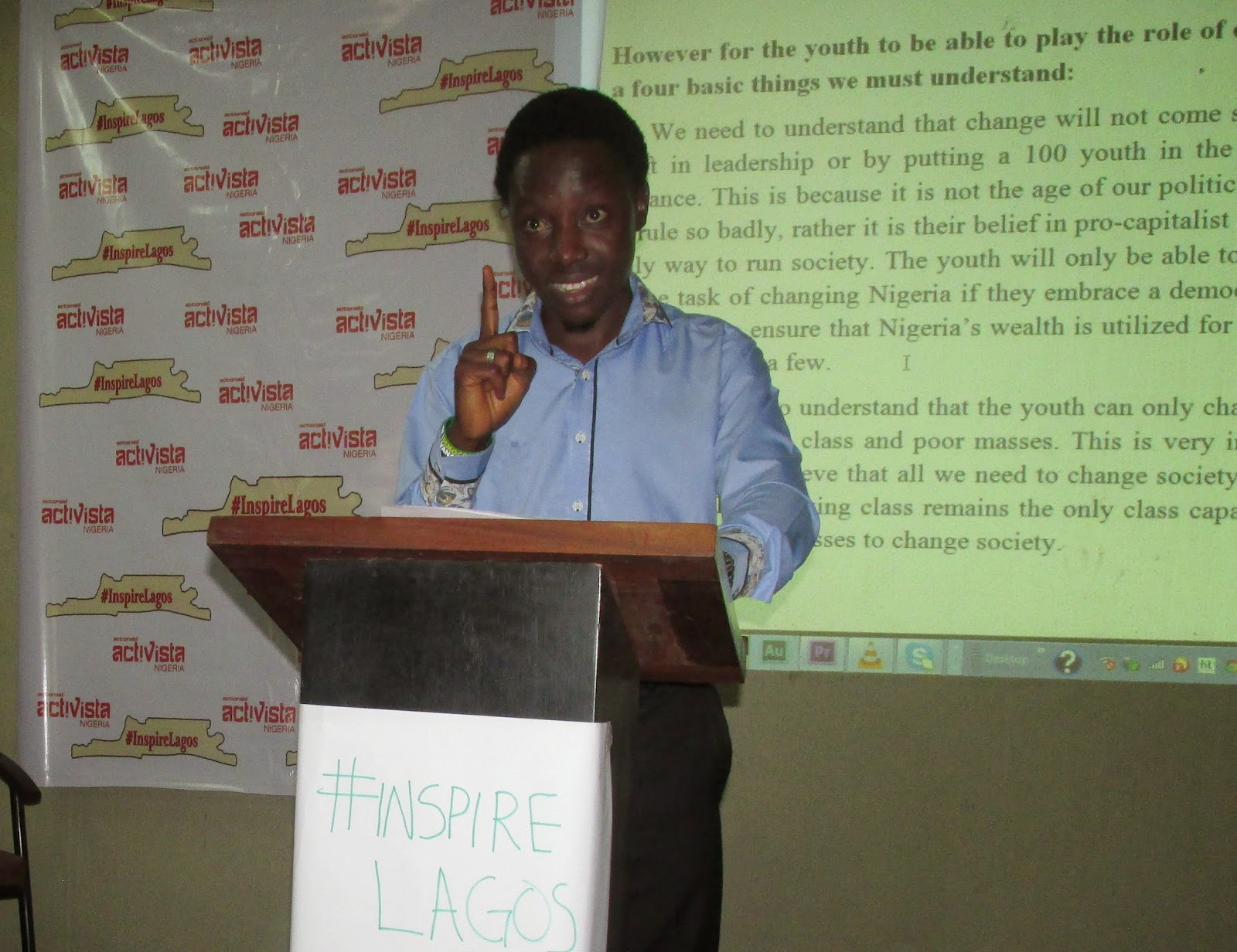 Youth Can Only Participate as Change Agents

I must start by expressing my delight at the opportunity given to me to address this gathering. As the organizers have advertised on social media, this is a gathering of 60 young leaders and entrepreneurs. I am particularly fascinated at the choice of date; today being the 54th independence anniversary of our dear country Nigeria. For any youth of this country who has any shred of humanity left in them, there is no better thing to do today than to sit down in a gathering of fellow youth to discuss the future of our dear country. I therefore say thank you Activista for bringing us together.

It was just a few months ago that the centenary celebrations were organized with fanfare amidst colossal national tragedy manifested in the abduction of over 200 school girls by the Boko Haram insurgent. Since that time, Nigeria’s problems have continued to increase at alarming rate. Despite government claims of implementing a so-called transformation agenda, no single sector in Nigeria is performing averagely.

Take education for instance, over 60% failed the recent West Africa Senior Secondary School Certificate Examination (WASSCE). Despite billions of naira sunk into the Universal Basic Education (UBE) scheme over the last 7 years, no real improvement has happened. Instead between 2004 and now, the number of school-age children that are out of school has increased from 7.3 million to 10.5 million. That is the fourth largest growth rate of out-of-school children in the world! 6 million of the 36 million girls out of school worldwide are Nigerians. This and many more cheerless statistics of Nigeria’s education sector is what has recently forced UNESCO to publicly express doubt about Nigeria’s ability to meet “the Education-for-All Goals in 2015”. 2015 is just 3 months away, I have no doubt that there is no way Nigeria is meeting this target.

Youth unemployment is another issue. We must all remember the death of about 20 unemployed youth during a stampede at the Nigeria Immigration Service screening. Their death has become a rude awakening to the reality of a country literarily awash with petrodollars but is unable to provide gainful employment to its graduates. Unfortunately despite the few days of outrage, it seems Nigerians have again moved on. But the reality is that the alarming level of youth unemployment in Nigeria is a time-bomb that will not go away simply because we ignore it. Let me make myself clear, the twin crisis of lack of access to education and youth unemployment are part of the deadly triggers behind the insurgency in the North East of Nigeria. Without providing free and quality education as well as decent and gainful jobs, the threat of insecurity will continue to hang over this country like the proverbial sword of Damocles.

Going by the above background, i believe that youth can only participate "in governance and elections" as change agents. It is very clear that change is needed to save this country and its people. For that change to be possible, the youth have a very important role to play. As the young generation, it is our future that these capitalist vampires in power are mortagaging through their rabid greed and corruption! When today, the government underfunds education and healthcare, that government is creating a legacy of crisis which our generation will suffer from until old age. All the crises that this government has created are like debts which our generation will have to pay for in tears. So it is legitimate for us to be concerned and to want to be at the forefront of the process of making change.

However for the youth to be able to play the role of change agents, there are a four basic things we must understand:

(1) We need to understand that change will not come simply by a generational shift in leadership or by putting a 100 youth in the National Assembly for instance. This is because it is not the age of our politicians that has made them to rule so badly, rather it is their belief in pro-capitalist anti-poor policies as the only way to run society. The youth will only be able to play a meaningful role in the task of changing Nigeria if they embrace a democratic socialist ideology that seeks to ensure that Nigeria’s wealth is utilized for the needs of all instead of the greed of a few.

(3) To make change, we must organize. All youth who deem it necessary to take part in the process of liberating Nigeria needs to join an ideological and campaigning organization in order to begin to work with others of like minds towards the collective goal. Standing alone only weakens us. For instance, my organization, the Education Rights Campaign (ERC), has been at the forefront of the struggle against attempts to commercialize public education. We will be greatly strengthened and our voice will be louder if more youth decide to join us and play more active roles in our activities.

(4) We must understand that for as long as Nigeria is ruled by the PDP, APC and their proxies in LP and APGA etc, Nigeria will continue to go from bad to worse. In 2011, I was one of the few youth in Nigeria who did not get carried away by the illusion that President Jonathan could be any different from the rest of the gangsters in PDP. Many youth were carried away because he appeared to be “a new face”! But today the scales have been removed from people's eyes and now everybody can now see President Jonathan for what he really is:  an anti-poor president implementing policies to favour the rich at the detriment of the poor! Now we are on the eve of the 2015 general elections and already illusions are being generated in opposition politicians. Just like I did back then in 2011, I will like to warn that any illusion that the APC can rule better than the PDP will also be met with disappointment. This is because in every way, the elements in the APC have demonstrated their anti-poor and pro-capitalist credentials. The fee hike at the Lagos State University (LASU) and the successful struggle against it is testimony to this. For their unspeakable crimes, neither the PDP nor APC deserves our votes!

In my own view, changing Nigeria will require that we organize to kick out the elements ruling us presently, take political power into own hands and begin to run Nigeria to meet the interest of all. This will require that we form, register and build a political party with bold socialist programs that can be the platform, around which the working masses and youth are mobilized to take political power and throw out the capitalist robbers who have held our country and its future to ransom. It is to this end that recently a group of Socialists and activists formed the Socialist Party of Nigeria (SPN). I am a member of the party and its National Youth Leader.

Now I must admit to you that in all honesty that the SPN is still a very small political party and to make matters worse, its registration process has just been terminated by INEC but we have gone to court to challenge that. But does this mean that change is impossible? Actually, there are many who think it may be impossible to change Nigeria. Some have even said that given the monetization of the electioneering process, even if the SPN is registered it may not be able to mount any serious electoral challenge to rescue Nigeria.

All I will say is this: As things stands today, there is so much anger boiling in the hearts of millions of the Nigerian people and the youth at the social and economic injustice we face every day, at the mass poverty in the midst of plenty and at the corruption and impunity of those who rule us. This anger has now reached a boiling stage. All that has prevented an all out revolution is the absence of a leadership that is bold enough to lead. If in this potentially explosive situation even just a few people are able to organize a political party with a consistent revolutionary program that captures the aspirations of the people for change, it may take many years or just a few months, but very certainly the Nigerian people and youth will one day respond and rise in their millions to take their destinies in their own hands.

Change may be difficult but it is not impossible!

On this note, I say thank you for listening,