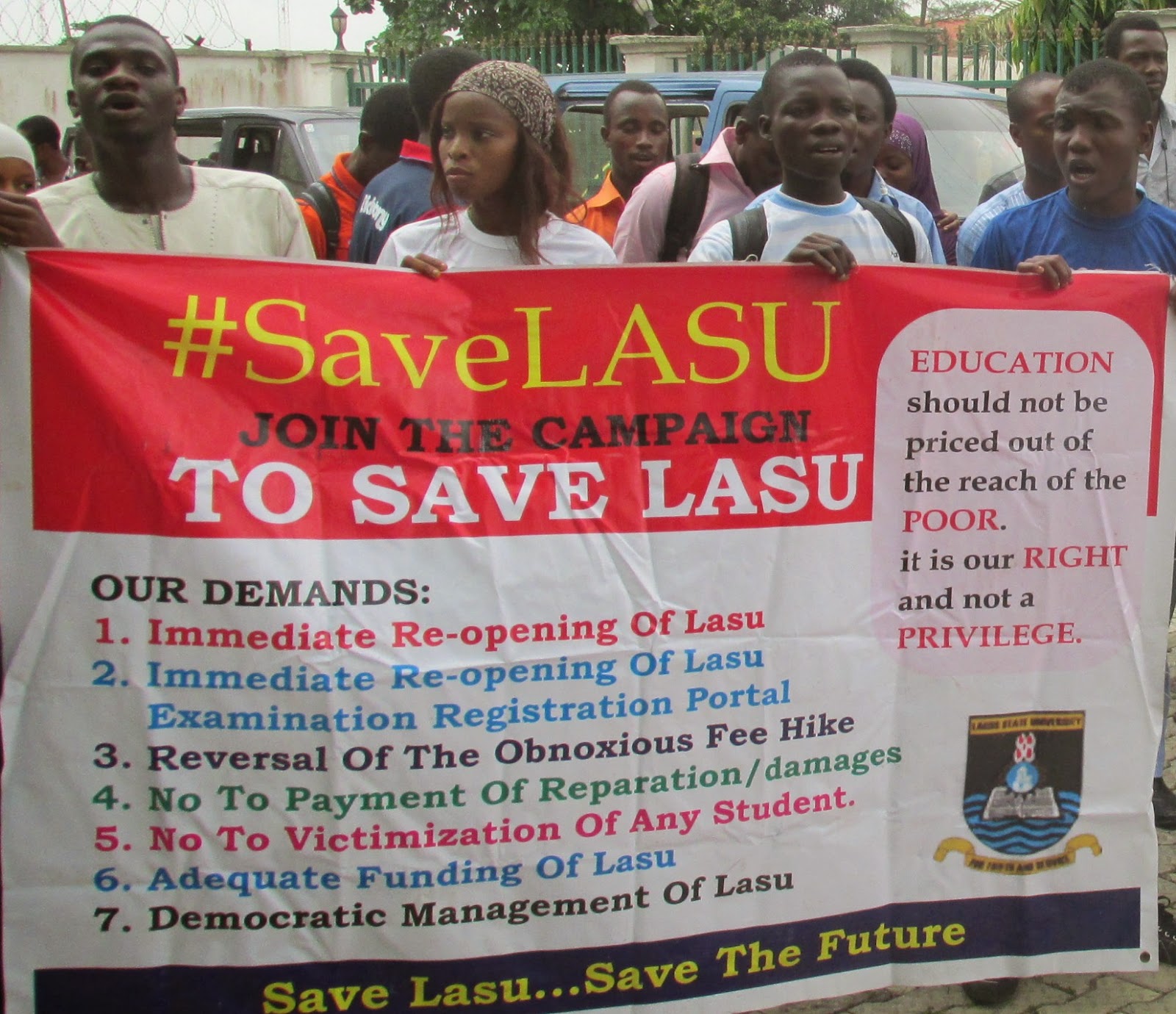 The struggle to save education and also to fight for reversal of fees at the Lagos State University (LASU) gained more echoes last week.

On Thursday, 3rd of April 2014 at about 11am, nearly a one hundred people gathered to discuss the fate of public education at a symposium organized by the #Save LASU Campaign Movement. The symposium took place at the Conference Hall of CLEEN Foundation located at 21 Akinsanya Street, By FRSC Office, Taiwo Bus Stop, Ojodu Berger Lagos. #SaveLASU is a broad movement formed by the Education Rights Campaign (ERC) and concerned students of the Lagos State University to fight for the reversal of the University’s outrageous fees.

The theme of the symposium was “How Fee Hike and Commercialization Kills Public Education - LASU as a Case Study”. The gathering was composed by LASU Students, media, invited guest and also different layers of activists.

Giving the welcome address, Hasssan Taiwo Soweto who is the National Coordinator of Education Rights Campaign (ERC) saluted the courage of the students who came all the way from their University for the symposium. This inspite of examinations coming in few days.

He explained that the root cause of January 23, 2014 crisis which led to the closure of the University was the outrageous fee hike. According to Soweto “the reason why 1,292 students could not register until the registration portal was closed was because they found it difficult to pay the outrageous fees”. He also explained the new attempts being made by the University management to clampdown on LASU students especially now that the institution has fully resumed. Just last week, the University’s campus marshals arrested and detained the elected officials of the University’s Students Union. The campus marshal is a security outfit formed by the management ostensibly to maintain security on campus but in reality they are the attack dogs of the authorities to repress students. The Campus Marshal is headed by Captain Adeyinka who was recently re-hired after his transfer years ago for his highhandedness and the shooting of a student. All this shows the new mindset of the University Management which is to run LASU like a maximum security prison.

Sunday Fayose the Managing Consultant, Global Education Communication, one of the invited speakers,  started by singing a song “we shall overcome, we shall overcome one day, deep in our heart, we still believe, we shall overcome one day” The song was an inspiration to everyone at the gathering that one day we shall overcome, we shall win the struggle for a better society where all will be well. He talked about how poverty will have denied him free education but because of free education of that era he was given opportunity to get University education. He said our demand for free education is justified because our parents have paid taxes which government is supposed to use to fund quality, free and functional education at all levels . He gave the rate of increment in school fees from N250 to N25, 000 and now to N350, 000. He referred to this type of school fees increment as supersonic increment and not astronomical as people call it. He ended by urging students to fight for the reversal of LASU school fees to make it affordable to the poor.

The Deputy Chairman of the Joint Action Front (JAF) Achike Chude spoke next. He declared JAF’s support for the struggle and encouraged students to be more steadfast. He said Nigerians are ready for change and the change will come soon. He said he was very happy last time he saw students occupying the governor’s office which has now forced the State Governor to demand an open debate to justify while the school fees must be reduced. According to Achike “If you want to develop a society, give the youths education”.

Mohammed Fawehinmi (son of late foremost human right activist Gani Fawehinmi) was also among the invited guests. He applauded LASU students for the struggle. According to him, education is the bedrock of a society. If we have quality education there will be good health sector, good roads and even adequate electricity supply. Reading out a press statement, Barrister Fawehinmi said ‘I recall vividly from history as I was taught in school that Late Chief Obafemi Awolowo, one of the founding fathers of Nigeria Republic spent 55% of the budget on Education in the South-west. Every Nigerian who studied in the south –west benefited and was the best for it.

We as Nigerians must develop ourselves, if our present elected officers and so-called political leaders fail and categorically refuse to do so. Nigerians please I urge you to tell our Federal and State governments to provide free education at all levels from primary schools to tertiary institutions for our children. It is the entitlement of every Nigerian child. The necessary infrastructure is affordable. Nigeria is rich.’

In her contribution Adeshina Rasheedat, the Assistant Secretary of the Joint Action Front (JAF), said that with what she was seeing  a new Nigeria is possible. She continued by saying the ruling class do not want the poor people’s children to get education and that is while they increase school fees beyond what the poor can afford. The capitalist system works only for the rich. She called on Lasuites to unite and fight the battle to the end and called for immediate united front to fight for system change. She ended by saying it is only when we fight for a socialist system that free, functional and quality education can be guaranteed for all.

In his solidarity speech, A.J Dagga Tolar the chairman of Nigeria Union of Teachers (NUT) Ajeromi-Ifelodun Local Government and member of the Democratic Socialist Movement (DSM) applauded students for being steadfast in the struggle. According to Dagga, his joy this afternoon is that the #Save LASU movement has not relented in the struggle. The reason for creating LASU by former governor Lateef Jakande was for Lagosians to have access to University education. Why the APC government in Lagos is unable to make education affordable and accessible to the poor is because the party just as the PDP supports and defends the ideas and policies of capitalism which is inherently anti-poor and pro-rich.
He said Nigeria needs a revolution to end capitalism and establish a democratic socialist system. Only this can guarantee an end to corruption and ensure that our collective resources will be used for the need of the society. To this end, the Democratic Socialist Movement (DSM) has taken a step to register a Socialist Party of Nigeria (SPN) that can champion the process for a revolutionary change in Nigeria. He urged the gathering to join hands in building the party. He ended by encouraging Lasuites and the # Save LASU movement to remain steadfast in the struggle because victory is possible.

The symposium ended with solidarity songs around 2:30pm with a renewed commitment by students and members of the #SaveLASU campaign movement to continue the struggle until victory.
Posted by Education Rights Campaign (ERC) at 16:43