Members of the Senior Staff Association of Nigerian Polytechnics (SSANIP) in the Southwest Zone on Tuesday June 4 converged at the Yaba College of Technology (YABATECH), Lagos, for a protest rally and a news conference to press home their demands and call on the Federal government to implement the agreement, known as CONTISS-15, it reached with the union in 2009.

SSANIP together with ASUP (Academic Staff Union of Polytechnics) has been on strike since April 17 over the failure of the government to meet their demands which also include issues such as improved pay, working conditions, discrimination against Polytechnic graduates, establishment of special commission to regulate polytechnic education, and funding of polytechnic education. 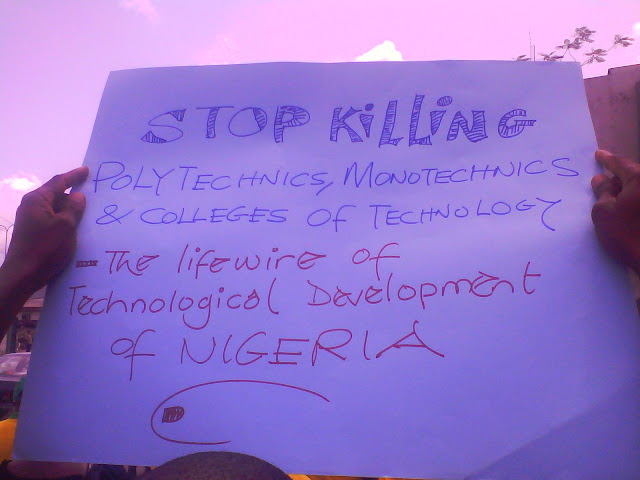 The rally, which was led by the Peter Jegede, the National Secretary of the Union and Adebanjo Ogunsipe, the Southwest Coordinator, drew about 300 participants from a good number of polytechnics in the southwest Nigeria, though dominated by the members from Yabatech. 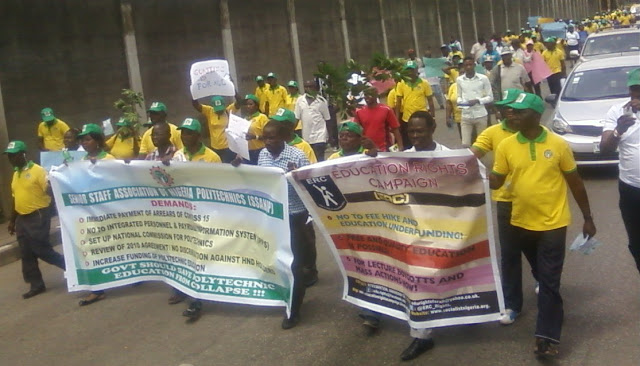 The members of DSM through the Education Rights Campaign (ERC) actively participated at the rally to show solidarity to the striking workers. Their strike action has now entered the 7th week without government showing concern about the demand of the workers and the plight of students who have been forced to stay at home.

The ERC has been intervening in the strike since its inception. On May 21, the ERC participated actively in a solidarity protest called by the National Association of Polytechnic Students (NAPS) in Abuja. On May 29 which is Nigeria's annual "Democracy Day", a protest called by the ERC in Minna Niger State, North-central Nigeria was foiled by heavy militarization of the city. In Lagos, ERC's active intervention in the strike in form of independent leafleting around Polytechnic campuses is beginning to resonate with the striking workers as well as students - a few of whom are already showing interest in joining us.

The June 4 protest started from the main campus (YABATECH) to the federal civil service club Yaba where the press conference was held. The demonstration did not end there as it continued shortly after the press briefing to the popular Herbert Macaulay way.

At the press conference, the leadership of the union raised the issues in contention with government and called for the solidarity from the general masses, students and parents. They highlighted the poor conditions of polytechnics and called for improvement in the funding of the polytechnic education.

Speaking for the ERC and DSM, Comrade Chinedu Bosah praised the effort of the striking workers for boldly struggling against the collapse of polytechnic education in Nigeria. While commenting on the demands of SSANIP, he mentioned that the establishment of NPC will not change anything if the same ruling class and/or their appointees are allowed to constitute the body. He therefore urged the union to demand for the NPC to be democratically constituted by elected representatives of unions in polytechnics.

He also urged SSANIP to call for the support of other unions, the wider labour movement like the Nigeria Labour Congress (NLC) and the Trade Union Congress (TUC) and students to join their struggle in order to give more weight and compel the government to meet its demands.
Posted by Education Rights Campaign (ERC) at 14:42