* The coaching will end with a public symposium on the 4th September, 2018 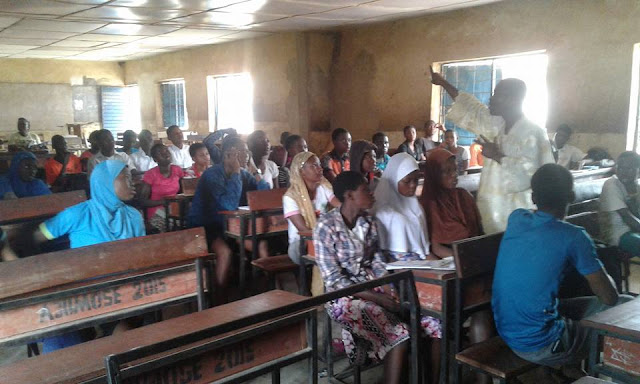 In the first day of the lesson, which is strictly organised for students transiting from SS2 to SS3 in Ibadan North Local Government,  a total enrolment of 55 students from not fewer than 7 public secondary schools within and outside the said local government area was recorded. Between the first week and now (fourth week) the number of regular and registered participating students has increased to over 100 students from over ten public schools and 3 private schools with the participation of over 10 volunteers teachers. None of these teachers are being paid for the service rendered and they include members of Democratic Socialist Movement, DSM and Socialist Party of Nigeria, SPN, some teachers in public secondary schools who have been long-time supporters of DSM as well as some academic and post graduate students from the University of Ibadan who were attracted to participate in the lesson through a letter written to Department of Teacher Education, Faculty of Education, University of Ibadan.

Subjects that are taught are Mathematics, English Language, Physics, Chemistry, Literature in English, Government, Economics, Biology, Commerce etc. They are usually handled by different teachers from Monday to Thursday which are scheduled strictly for serious academic work while Fridays are set aside for some extra-curricular activities like drama, poetry etc during which students are encouraged to showcase their potentials and capacity.

Since this lesson commenced, two of the three Fridays have also been used to introduce the students to ERC. This was with a view to win some change seeking ones voluntarily to the banner of the organisation as a step towards building a future generation of activists and young Nigerians that will continue to deepen the campaign for free and quality education at all level. One of these occasions was equally used to introduce Socialist Democracy, a bi-monthly publication of DSM. No fewer than 20 copies of the SD have so far been bought by some of the students while 25 of them had shown interest to join ERC.

Going by this background, it is very obvious that this year edition is an improvement of the last year own. This is despite the effort and attempts by the Oyo State government to frustrate the lesson from being held this year. The Community Grammar school which was used as the venue for the inaugural edition of the free holiday lesson last year was suddenly picked by the Oyo State government as the venue to organise its own programme tagged OYOMESI. This is after we had already secured the same venue through a letter written by the ERC and approved by the School management.

It will be recalled that OYOMESI is a scheme that also include a free lesson for students during holiday. This was organised last year at St Luis Grammar School, a public school located some meters always from the Community Grammar School. This was around same period ERC free lesson was going on at Community Grammar School.  But while the ERC lesson which was organised strictly for students transiting from SS2 to SS3 attracted a total number of 95 students from 7 public schools, the OYOMESI which is organised probably with millions of Naira by the state government under a Private Public Partnership, PPP arrangement for students from JSS 1 to SS3 did not last beyond the first week of its commencement as less than 50 students enrolled largely from the school the programmes held.

We suspect that it was this huge success recorded by the ERC lesson that prompted the Oyo State Government to change the venue for its own programme from the venue used last year to the venue used by the ERC. It could be that the Oyo State government thought that what responsible for the huge participation of students in the ERC lesson was because of the location of the Community grammar School which is not only central but also close to the road side.

Unfortunately, despite this, there is no practical sign that the school is currently being used for such a purpose. It could either be that the programme was not successful like that of last year or the venue was purposely held down by the Oyo State government to prevent the ERC from holding this year holiday coaching

There is no way the OYOMESI would have attracted the participation of the teachers and students. Asides the fact the most teachers did not trust the scheme, there was no practical effort by the state government to sensitise and encourage the students to participate in the scheme let alone their parents who could have been carried along so that they can encourage their children to participate in the scheme. This was deliberate by the state government as the scheme was not originally designed for students to participate but for it to be used as a smokescreen to siphon public fund.

Finally, the on-going second edition of the ERC lesson will be brought to an end with a public symposium which has been scheduled to hold by 12noon on Tuesday, 4th September, 2018. This symposium is hope to be used to bring parents and guardians of participating students and volunteer teachers together to discuss the crisis in the education sector and the way forward.