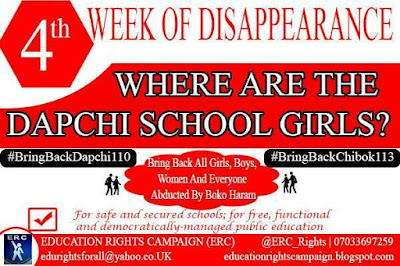 The Education Rights Campaign (ERC) condemns the abduction of 110 school girls by the Boko-Haram terrorist group at the Government Girls Science and Technical College, Dapchi in Yobe State on February 19, 2018.

The ERC demands the immediate rescue of these young schoolgirls safe and unharmed. We also demand the rescue of the remaining 113 Chibok girls as well as several other persons including young school boys and women in Boko Haram Militants captivity. Apart from the Dapchi girls, several mass abductions of both girls and boys have occurred in the North East since 2009 with little or no media coverage. Infact in 2014, 58 male students of Federal Government College Buni Yadi in Yobe State were slaughtered in cold blood by the Boko Haram militants for receiving “Western education”.
For us in the ERC, all lives matter. This is why we demand that alongside the Dapchi and Chibok girls, all other victims of mass abduction must be rescued and reunited with their families. Just as it has been done in the case of Chibok and now Dapchi, we demand a list of all people who are missing or abducted by Boko Haram in Yobe, Adamawa and Borno states and a coordinated effort by security agencies to rescue them within the shortest possible time.
As far as we are concerned, the Dapchi abduction is one that should not have happened. We hereby demand a public probe comprising representatives of the labour movement, communities in the North East and civil society to probe the Safe School Initiative launched by former President Jonathan and former UK prime minister and of UN envoy for Global Education Gordon Brown in the aftermath of the Chibok mass abduction in 2014. This initiative which attracted donor funding worth millions of dollars was meant, among other things, to provide security and fortifications for schools in Yobe, Adamawa and Borno in order to prevent a repeat of the Chibok mass abductions. We need such a public probe to determine just how much security and fortification the Government Girls Science and Technical College in Dapchi had and whether or not the huge funds donated to the Safe schools initiative are not being stolen just as we have seen with the misappropriation of funds meant for Internal Displaced Persons (IDP) camps.
Approximately four years after the Chibok Schoolgirl abduction, without bringing the perpetrators to justice, without recovering all the girls, and with huge sum of money paid as ransom to the terrorists, it is a total shame that the Nigerian Government still cannot secure the lives of Nigerians including young school girls and boys.
A central responsibility and cardinal objective of government is protection of lives and property. The government cannot declare any victory over the Boko haram insurgency when this cardinal objective continue to remain elusive. No matter how many times Boko haram is declared defeated, the only way citizens will only begin to feel any sense of relief if they can feel safe and secured to pursue their daily bread without threat of being killed by a suicide bomb or their children abducted from schools.
We consider this kidnapping as not just a setback for girl-child education but for education generally. It must agitate the minds of Nigerians that these girls are probably going through dehumanizing rape, sold off as sex slaves, going through forced marriages, violent assaults or different forms of emotional, psychological, sexual or physical abuse in the hands of these terrorists. We recommend a financial compensation by the government to support these grieving parents and a total health rehabilitation for these girls upon their recovery from the terrorists.
To make up for the setback that Boko Haram attacks and mass abductions has inflicted on girl-child education, the Education Rights Campaign (ERC) demand increase in the funding of the education sector, rapid expansion of education facilities in the North East and all parts of the country, adequate protection for school infrastructures, students, teachers and other education workers and a total reversal of commercialization and all anti-poor education policies. Without improving funding to education and halting all anti-poor education policies, the Buhari government will be helping Boko Haram to complete its campaign against formal education in general and girl-child education in particular.
As far as we are concerned, Nigeria has enough resources to provide free, functional and democratically managed public education at all levels. The only problem is capitalism which means the much of Nigeria’s wealth is concentrated in the hands of a few. The only way to tackle this in order to ensure that resources are freed to provide free education is to place the key sectors of Nigeria’s economy under public democratic control and management alongside with a socialist plan.