*No fewer than 16 Students signed to join the Organisation


A public symposium was organized by members of Education Rights Campaign, ERC, on Thursday, February, 22 2018 at Federal College of Agriculture, FCA, Moore plantation, Ibadan. This symposium which was used to publicly launch both the ERC and Democratic Socialist movement in the mooreplantation community was attended by no fewer than 72 persons which including students from both FCA and Federal College of Animal health and production technology. Also among the participants are members of staff from the three institutions within the Moore Plantation and activists from outside the campus.


Speakers who participated in this symposium which has as its theme: the crisis in education sector-the causes and way forward and sub-theme: the lingering industrial deadlock in FCAIb: what is the way forward? include comrade Oluwafemi Oladeinde; the chairman, NASU, IAR&T branch; Comrade Abbey Trotsky, the State secretary of DSM and Coordinator of campaign for Democratic and workers’ Rights, CDWR; Comrade Adeniran Morenike, the convener Joint Action Committee of workers Unions in FCAIb and Comrade Babajide Olaoluwa, the President, student union, FCAIB.


Comrade Adeniran who introduced the discussion has the focus of her presentation centre around the industrial deadlock in FCAIB and the way forward. Various causes of the lingering crisis in the college were clearly highlighted. Therefore, submitted on suggestion as to how some of the damages caused by the crisis can redeem. Notably among the measures mentioned in this regard include: proper channeling of communication, taking responsibility revolution; avoiding rumors and to be focused. Following this was the presentation by the SU-FCAIB president, who in his introduction gave a general overview of the crisis that led to the closure of the school for months. 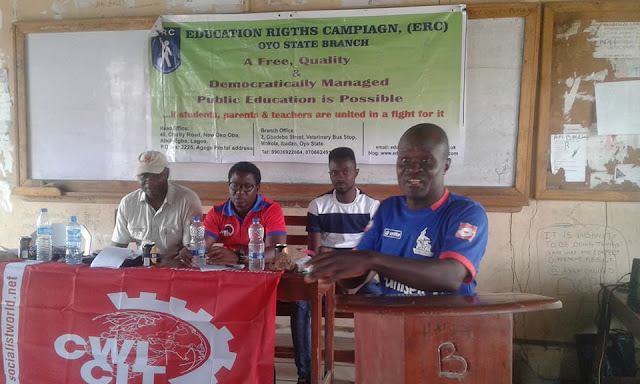 According to Comrade Olaolu, the crisis started on the 22nd of august 2017 when the student union held a congress during which it was resolved that a student peaceful protest must be organized against the continuous failure to give students some items like practical coats, identity cards, which student have actually paid for.  Other welfare and academic related issues like poor electricity supply, water supply and non -accreditation of some courses within the college are among the basis for the protest. Olalu lamented against the response of the administration of the college that arbitrarily shut down the college even before student ever embarked on the protest itself.


This kind of attitude was described as autocratic mode of leadership in the college and was identified among other factors like lack of communication between the management, students and members of staff were mentioned as the major cause of the crisis in the college. He therefore submitted while recommended that federal ministry of Agriculture must give a priority to regular monitoring of the activities in the college.


Comrade Oluwafemi Jokanola, the Chairman, Academic Staff Union of the Polytechnic, ASUP, FCAIB branch while given his solidarity speech commended members of DSM and ERC for organizing the symposium which he opined was timely and serves as an opportunity for both students and members of staffs to come together and discuss with a view for them to know their rights as stakeholders in the educational sector. He also expressed his sympathy to the FCA students who were the major victims of the lingering industrial crisis in the college and therefore advised that students should always seek to know their right, He submitted while insisting that except student know their rights they will find it difficult to know what to stand for in the course of their political struggle. 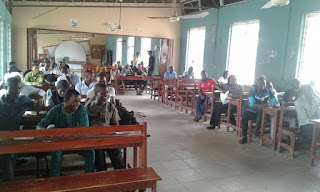 Abbey Trotsky in his presentation was able to establish the fact that the ongoing crisis in FCAIB is a classic example of the crisis bedeviling education sector in the country. He simplifies the cause of the crisis in the education sector to that of government underfunding syndrome and corruption in the educational institutions. He gave highlights of  how successive government at all level across the country including the Buhari/APC-led federal government  has failed to comply with the UNESCO recommendation which says that no developing nation like Nigeria must vote less than 26% of yearly budgetary allocation on education.


He however, noted that not until when capitalism system of exploitation that often encourage corruption in education sector itself is defeated and replaced with socialism which is a system of running the society in the interest of majority against the profit interest of the few, the question of running education institution by the elected representative of the student and workers will continue to be impossible. It in the light of this, he encourage participants especially students to join ERC and DSM towards building a forces for revolution which is an inevitable stage to enthrone socialist order in the society. A brief highlight of the historical success recorded by DSM in registering a Socialist Party of Nigeria (SPN) was also mentioned while making his submission. 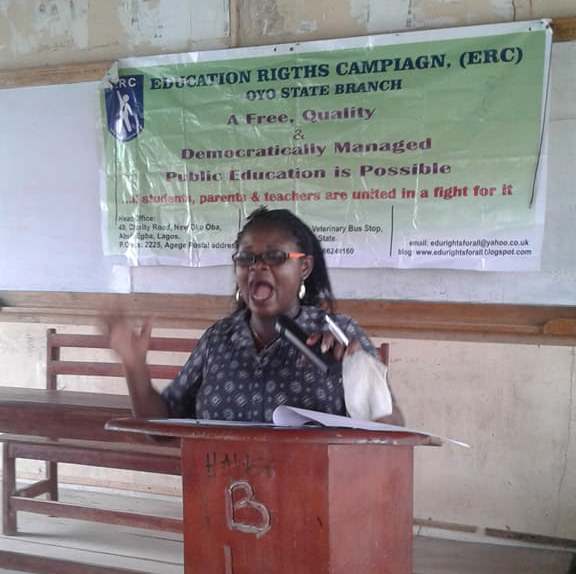 The highpoint of the symposium was when the floor was opened for comments and contributions. Among those who contributed was a Comrade Ojo, a parent and member of CDWR from the Cocoa Research Institute of Nigeria, CRIN, Ibadan. She expressed her displeasure over the state of things in the college of animal health and production technology: the exuberant fee being paid by students and yet nothing to show for it. She therefore encouraged the Students Union not to compromise its historical responsibility to always stand and defend both the economic and political right of student in the institutions. This was buttressed by Comrade Daniel, a supporter of ERC who also charged the incoming Union executive to be ideological and to put the interest of the students’ populace above their personal interest.


Other persons who contributed to the discussion include Olasumbo, female student and Kehinde Olumide.  They both encouraged members of the ERC not to relent on the struggle for a better society. The decision to form SPN was equally commended but also charged the leadership to ensure that such a party is encouraged to be built on campus.


The programme was brought to end following a vote of thanks and solidarity songs led by comrade Caleb, the Secretary of the ERC Moore Plantation branch. At the end of the symposium, 16 persons who signed to join the ERC/DSM participated in short meeting organized to review the programme itself.
Posted by Education Rights Campaign (ERC) at 19:41