No fewer than 50 persons were in attendance at a public symposium organised by the Oyo State branch of Education Rights Campaign, ERC on Friday, 8th September, 2017 to mark the end of a four week free holiday lesson it organised specifically for secondary students transiting from SS2 to SS3 in the state. In attendance were students who participated in the free holiday lesson, parents and volunteers teachers. 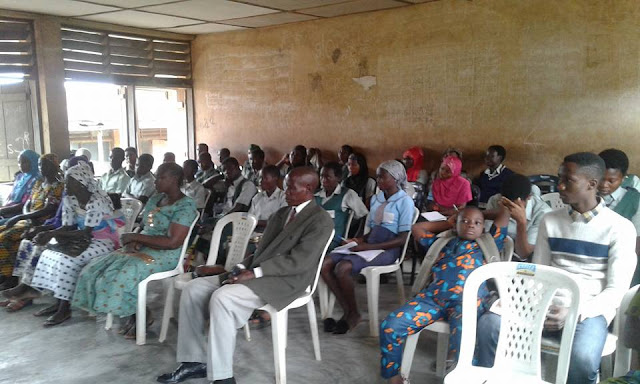 The first to speak was Mr Ojo who introduced the topic by highlighting factors that are responsible the poor academic performance of secondary school students in the state in external examination like West Africa Examination Council, WAEC. The poor attitude of government towards adequate funding of public education was recognised as one of the factors. However, Ojo believed that the factor largely responsible for poor academic performance among students in the state is the attitude of students and that of their parents toward education. This view was refuted by Dr Deji Omole who in his own speech maintained that the so-called poor attitude of students and parents to education are largely induced by bad governance by members of the political ruling elites 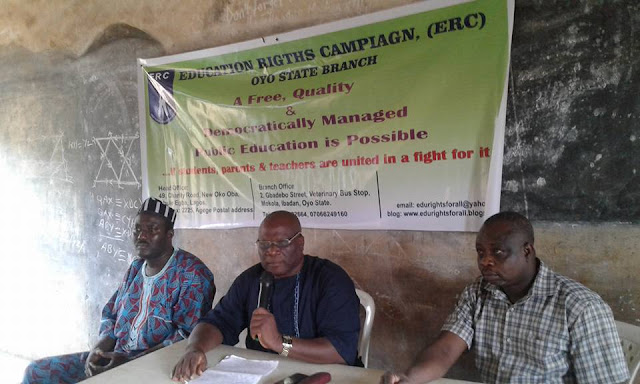 Omole believes that the  so called poor attitude to education by students and parents would die a natural death once the affair of the country is under the control of a pro-people government that would at all-time willing to invest huge resources at the disposal of the country in the area of need of the poor working people in which education is a key. He therefore, charged the government across the country including the Oyo State government to comply with the UNESCO recommendation which suggest that at least 26% of yearly budget must be voted on education. This was believed that is capable to commence the process of reversing the growing and threatening ugly trend in the country education sector.

Omole also commended the parents and students for the role they played during the last year struggle of the Oyo state working people against the attempt by the Ajimobi-led government to sell off some public secondary schools in the state. He therefore assured while making his submission that ASUU will always stand with workers and poor in the struggle for a better society in which struggle for a free and quality education is inclusive. 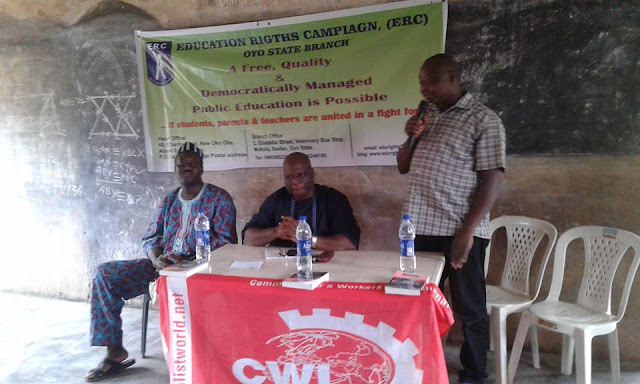 Professor Akinwole supported all the political points raised by Omole, while making his own contribution. According to him, the reason while government after government in Nigeria regardless of political parties continue to deny public education adequate funding is to continue to keep the working people and the poor in a perpetual state of ignorance. He therefore, submitted by urging ERC to design a way to continue to monitor and organise the participants in the free holiday lesson even after the free holiday lesson.

The highpoint of the programme was when students and their parents were given opportunity to make comments and share their views about the lesson. The five parents who spoke expressed their gratitude to the ERC for organising the free holiday lesson at the same time urged for wider publicity and awareness for the next edition of the lesson. The students on their own part shared the tremendous positive impact the coaching had on them. For instance, Adam Erepomini Joy, a female student from Community Grammar School, Mokola said that “lessons where money is paid could not have been better in terms of quality than the ERC free lesson”. She added that, “none of the lessons where students pay huge amount of money could boast of set of quality volunteer teachers which include university professors, PHD holders and principals of secondary schools that came around to teach in the free holiday lesson”. 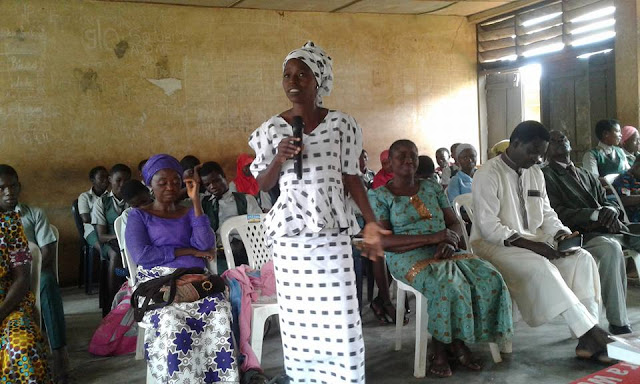 Another student from same Community Grammar school, Mokola, Sunday Ajayi also said that “the lesson offered me an opportunity not only to be taught by professor and university lecturers but also an opportunity to have an handshake with all kinds of important and credible personalities like lawyers and radio presenters”. Awal Resqot, a female student from Methodist secondary school, Bodija, said that “the lesson was a great improvement over what we are used to in our school. For instance, important subjects like English, Mathematics, Physics, and chemistry that we rarely have teacher to teach in my school are being handled by two or three different teachers in the ERC free lesson”. Bankole Rukayat from Ibadan Municipal Government, IMG Grammar School said “I’m glad for being part of the lesson. Am now convinced that public education can actually be better than private schools if it’s properly and adequately funded and organised” 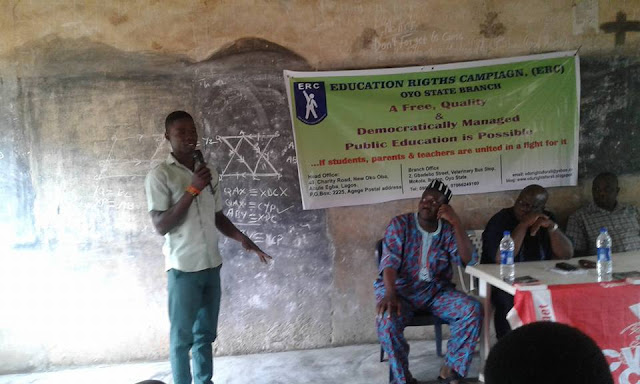 Other highlight of the symposium was the general overview of the free holiday lesson given by comrade Abbey Trotsky, the Oyo State Coordinator of Democratic Socialist Movement, DSM. Abbey Trotsky in his speech established the fact that ERC is not a charity organisation but a campaign platform for free and quality education. The point was raised to emphasized the central motive behind the lesson which is to demonstrate the fact that a free and qualitaty public education is possible if the enormous resources at the disposal of the Nigeria state is judiciously used for the need of the people and not for the greed and profit interest of the few rich Nigerian ruling elites in both business and polity. The initiative of the ERC is not to give credence to the impression that government alone cannot guarantee free and qualitative education as often advanced by many non-governmental charity organisations. 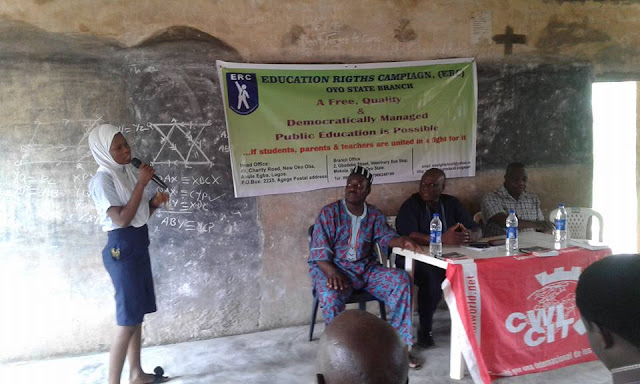 Among the volunteer teachers are academics in the University of Ibadan and professional  teachers in public secondary schools in the state. A total number of 10 subjects were taught in the four weeks the lesson lasted. These include: Mathematics, English Studies, Physics, Economics; Biology, Chemistry, Commerce, Account, Government and Literature in English Abbey also revealed that while the normal academic works hold from  Monday to Friday some extra-mural activities like career and counselling talks; drama and poetry are part of the activities undertaken in course of the lesson. The extracurricular activities were no doubt provided an avenue for students to showcase their abilities and potentials. Important personality with credibility which includes lawyers, broadcasters and professors were also invited at different occasions to talk to the students during the extra-curricular activities.

Also important to mention is that over 30 copies of Socialist Democracy (SD), paper of DSM, were sold to students. Political discussion and debate were often initiated around different articles in the SD. This no doubt offered an opportunity to introduce to some of the students to the programme and ideas of the ERC as well as that of the DSM. Abbey in his submission appreciated both students and their parents for making the lesson possible at the same time urge for their support in the subsequent edition of the lesson especially in the area of mobilisation and publicity. 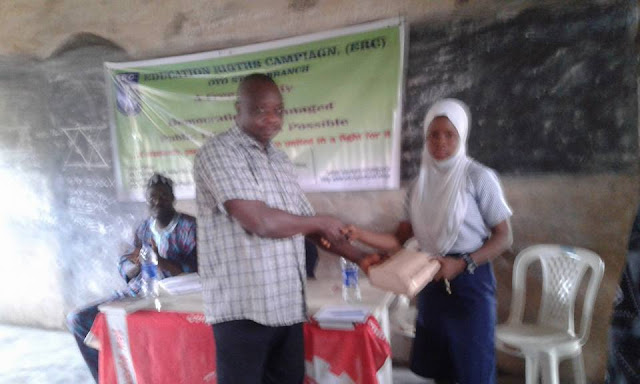 Gifts were also presented to the three best students in science, art and commercial. This presentation which was done by Dr Deji Omole was followed by a brief word of appreciation given by one of the recipients, Ejaife Roselyne, a student of community Grammar secondary school  on behalf of the two other recipients who are: Awwal Resqot and Olamiposi Ayuba; a female and male students from Methodist Secondary school, Bodija, respectively.

The symposium was covered by galaxy television station and was brought to end with an ERC anthem led by Comrade Shewa Adekoya, the Oyo state Co-ordinator of DSM women wing, who also doubled as the moderator of the symposium. After which a five student co-ordinating committee was set-up for organising further activities of the ERC including a monthly meeting of students who participated in the lesson. Two students and two parents including comrade Segun Ogun, the Oyo State coordinator of ERC later featured in a brief television interview
Posted by Education Rights Campaign (ERC) at 13:46