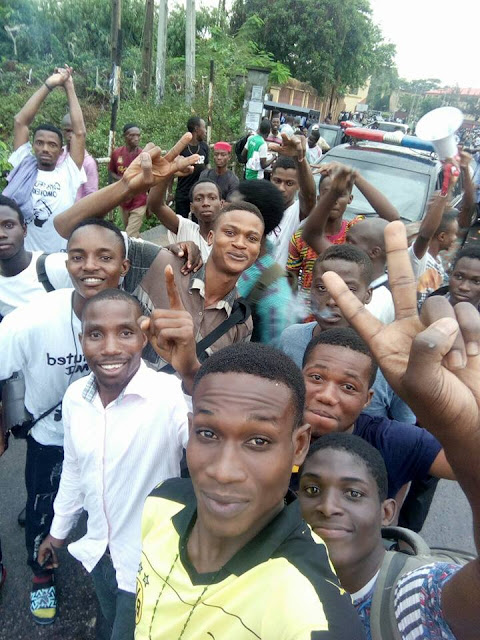 In the very hour of 8:00 am on Thursday 6 April, 2017 overone hundred students from different tertiary institutions led by SAVE UNILAG COALITION staged a united protest at the Special Offenses Mobile Court inside Lagos State Task Force Building located at Bolade, Oshodi, Lagos state. The mobile court is a special creation of the Lagos State government – a government bent on literarily whipping to death poor working class families with draconian anti-policies.

The Education Rights Campaign (ERC) is working within the SaveUNILAG Coalition alongside other groups and unions to campaign against victimization and for recall of rusticated students and ban on students’ unionism at the University of Lagos (UNILAG). 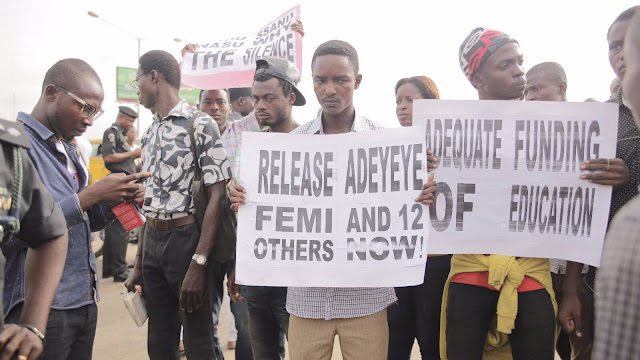 The April 6 protest was to demand the release of Adeyeye Femi and 12 other students’ protesters who were brought before the court on that day for continuation of trial on false charges. The 13 were arrested on Friday 31st March 2017 and hurriedly arraigned before the Special offenses Mobile Court on a Saturday morning on spurious charges. They were subsequently detained at Kirikiri prison. Their arrest sparked outrage especially when it turned out that the charges were completely false!

In the charge sheet, the police claimed they vandalized properties of Television Continental (a private TV station) but the TV station swiftly came out to say that though the students were at their premises to protest against continuous victimization in UNILAG, they were peaceful and orderly and there was no incidence of vandalism. A video evidence of the students while at the TV station was circulated. The TV station also ran an official disclaimer at every hourly news bulletin over the weekend and also put the Lagos State Commissioner of Police, Fatai Owoseni, on a live phone call where the CP was caught contradicting himself in his web of lies. This was the important background to the April 6 protest which drew participants who were not simply angry at the unlawful detention of the students but even more outraged by the role of the police, a public institution funded by tax payers’ money, which was clearly being used as private thugs of the UNILAG management.

Members of the Education Rights Campaign (ERC), Democratic Socialist Movement (DSM) and the Socialist Party of Nigeria (SPN), joined students from other tertiary institutions like LASU, TASUED, YABATECH, who in a rare show of solidarity, came to the protest to condemn the unlawful arrest and demand the release of the 13 students.

Both printed and electronic media were also present to cover the solidarity action that further confirmed the political might of united struggle against neo-liberal attacks on public education. Also the students’ struggle, judging from the protest and successful release of the detained students, shows the potential for rebuilding the students’ movement which has suffered several set-backs over the years as a result of the ideological degeneration of the National Association of Nigerian Students (NANS).

The protest largely got the sympathy from the general public, commuters, market men and women, workers including some of the rank and file police men armed to the teeth at Oshodi. Some of the police men that formed a barricade in front of the Lagos State Task Force Office felt the agitated voice of the protesters chanting solidarity songs peacefully while raising up placards. In the heat of the chanted songs that was causing major attention from the sympathetic public, the protesters demanded that government should fund public education with 26% budgetary allocation recommended by UNESCO than what is being budgeted (7%) for public education in Nigeria by the Buhari/APC government. 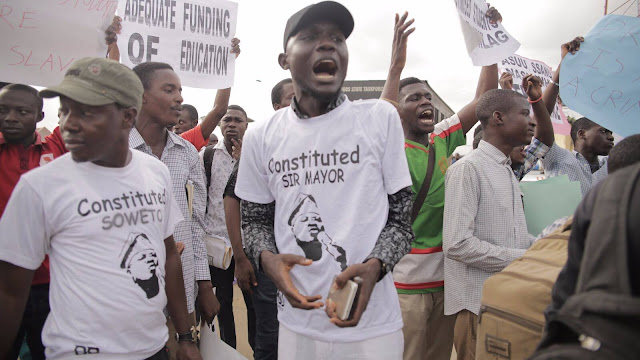 While this becomes a political statement on the lip of the protesters, the students also called for the release of the arrested 13 students as well as recall of all rusticated students by the UNILAG management. They subsequently also used the opportunity to further condemn the barbaric victimization being carried out at Federal and State universities just as is being witnessed in UNILAG.

Addressing the protesters, Sanyaolu Juwon, the Secretary of the SAVE UNILAG COALITION described as unethical and unacceptable the penchant of managements of tertiary institutions to unleash attacks on students when they peacefully protest for their rights. Juwon also called on the UNILAG management to unban the Students Union so that students can democratically organize themselves to defend their collective interests.

Members of DSM and ERC who were at the protest organized the movement to prevent any form of disorderliness and violence. The comrades were able to guide against whatever might turn the protest violent to the benefit of the state. This was happening around 9:30am while when the case was still going on. The protesters were prevented by the armed police men from gaining access into the compound so they staged their protest in front of the main building of the Mobile Court.

ASUU and Other Staff Unions Challenged to Act

H.T Soweto (National Coordinator of ERC and member of DSM) while addressing the press and protesters punch the heart of the whole purpose of the agitation, saying that we are not under a military regime where university managements will begin to implement directives that students do not have rights of association and freedom of speech. He also demanded that the 13 detained students must be released unconditionally. He also called for the rank and file police to have a democratic union to defend their interests. 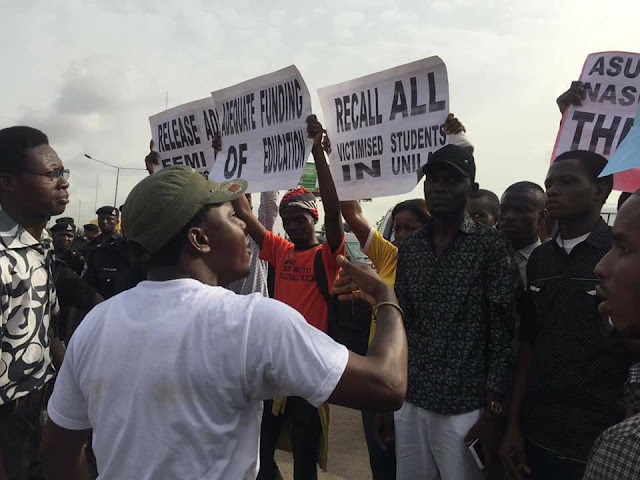 While rounding off his speech, Soweto pointed out that the relentless attack on students’ democratic rights in UNILAG following a students’ protest against poor welfare conditions in April 2016 poses a special danger to the workers unions on the campus. If the UNILAG management is able to get away with these victimizations, it would be emboldened to do the same for workers as well. This is why the silence of the staff unions is unacceptable. He called on ASUU, SSANU, NASU and NAAT to publicly condemn the victimization and to join students in a united struggle to fight both for recall of rusticated students as well as for proper funding of education.

Ayo Ademiluyi (DSM member and lawyer representing the students), said immediately they were released that "There was no case to judge". He continued, "The magistrate can't lay any charges against the students".  Bar. Monday Ubani, the Vice President of Nigeria Bar Association (NBA), also addressed the students briefly stating that their fight is a just cause. He called on the students to organize themselves in order to win more demands in coming period.

Unfortunately there was no banner at the protest, neither was there any leaflet. Only placards there were brought by members of ERC. They had different slogans like: For Adequate Funding of Public Education, (2) End Victimization of Student Democratic Rights, (3) Release the Detained Students (4) For the Removal of Lagos CP, Fatai Owoseni and others. All of these demands attracted a lot of solidarity support and sympathy from commuters, traders, bus drivers, workers, etc who saw the protest. Members of the DSM were at the protest with the April/May edition of the Socialist Democracy. No doubt, the peaceful protest was able to shake the Lagos State Task Force mobile court which was variously described by protesters as a kangaroo court created not to dispense justice but for extortion and oppression of poor people, traders, motorists and protesters.

After the case was dismissed, the 13 detained students filed out of the court room to the waiting arms of their comrades. There was wild jubilation. It was no doubt a powerful moment and a testament to the power of organized and united struggle – something that would motivate further students’ protests and actions in the coming months.

After the jubilation, students decided to march in celebration of the victory from the mobile court to CCG. The purpose of the march was also to find an appropriate place for a short meeting to plan concretely the next step to advance the struggle against UNILAG management as well as against other management of tertiary institutions that rain down victimization on students and education workers. 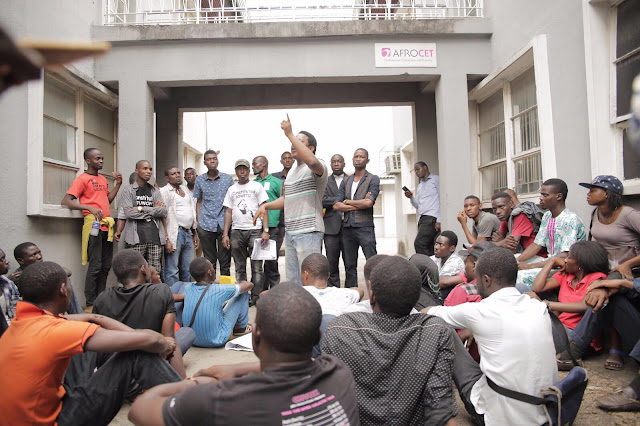 From the gate of the Lagos State Task Force Office, hundreds of the students marched in united force on the road of Oshodi, chanting solidarity songs. In order to maintain orderliness, the students decided to hold hands together while marching. It was a sight to behold. The protest march took about 45 minutes before arrival at CCG (Late Beko Ransome Kuti’s office) in Ilupeju. At CCG, there was a brief leadership meeting. It was made up of representatives of different unions and organizations mainly to review and plan way forward for the struggle. 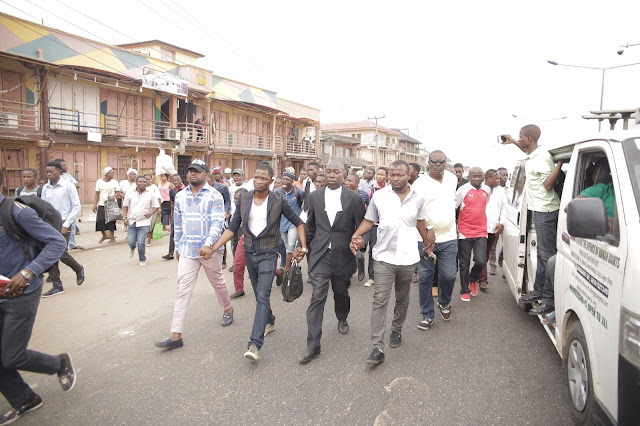 Interestingly at this point, Aruna Kadiri, president of a faction of the national leadership of the National Association of Nigerian Students (NANS) who had joined and addressed the protest at the mobile court left the premises. They played no role in the movement before and now despite the victory and the potential to win more, they are not interested in discussing with students about what needs to be done and the roles NANS can play. Clearly all he and his aides came to do was simply to identify with a popular struggle in order to build their own profile and possibly use this to negotiate payouts either form the government or even the UNILAG management. At the end of the meeting, the students dispersed inspired and convinced that struggle can win.