Eruption of protests in UNIPORT as Two Students Killed 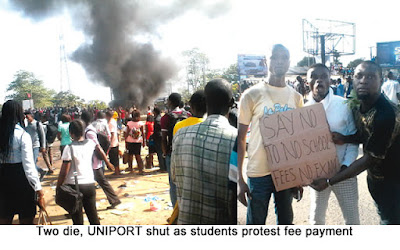 On the 10 and 11 April 2016, the University of Port Harcourt erupted in students’ protest against an insensitive policy introduced by the university authorities which forbid students who have not paid their school fee from writing examination. Being the first of its kind and the consequences that affected students would have to carry their semester courses over, this was enough to provoke students anger. The protest erupted after much pleading by students for the Vice Chancellor to consider their plight fell on deaf ears. The students protest disrupted exams from commencing; they shut down the school campus and barricaded the East-West road at Choba.

The protest was peaceful until the VC called in the police to disperse the protest which resulted in the killing of two Uniport students by the police who fired live ammunition at protesting students, and the serious injury of a third student who was admitted in the hospital. The University has since April 11th been shut down by the school authority. One of the slain students is Peter Ofurum - the newly elected President of the Faculty of the Management Science Students of the University.

While the ERC welcome the protest which has long been overdue, we condemn in strong terms the unprofessional conduct and unprovoked killing of two Uniport students by the Nigerian Police. We put the blame for the protest and killing of the two students squarely on the door steps of the VC.

Before management introduced this policy, there had been seething anger on campus by non- academic staff workers over 50% slash in their allowance and the students over deteriorating welfare conditions on campus. Since beginning of the semester in January, transport fare within campus has been jacked up by about 70% - a consequence of the lingering fuel scarcity experienced across the country, while electricity supply has been erratic, with water scarcity experienced almost daily on campus. This is apart from appalling learning and living conditions on campus which students over many years have been forced to endure.

ROLE OF THE STUDENTS’ UNION LEADERSHIP
It is quite unfortunate that before and after the protest broke out, which was largely spontaneous, many of the students’ union leaders, particularly the union president, were far from giving any real support to students agitations and demands, for the vice chancellor to reverse the wicked policy, not to talk of providing leadership during the protest.

Successive leaderships of the union since 2000 have a reputation of taking side with management against the interest of students whom they are elected to defend. This has exposed students readily to the commercialization drive of the school authority which has seen students fee increased at will by management from time to time. Part of the agenda of the activists and students involved in the protest should be to launch a campaign for the democratization of Uniport Students Union and for the emergence of a radical leadership that can energetically defend students’ interests.

Though spontaneous, this protest is the most serious and intense protest ever staged by Uniport students in a long time. The killing of two students by the police during the protest provoked the ire of students.  While the ERC does not believe in violence as a method for struggle, at the same time we recognize that in the case of UNIPORT, students who were ab initio peaceful were provoked upon seeing their colleagues’ lifeless bodies after being shot by trigger-happy policemen on the order of the university authorities. In this case therefore, it is the University authorities and the police that should take responsibility for any alleged violence that might have occurred.
The Education Rights Campaign (ERC) commends the state chapter of the Trade Union Congress (TUC) for condemning the police killing of two students. We call for more solidarity from staff unions like the Academic Staff union of Universities (ASUU), other staff unions and trade unions for the struggle of Uniport students.