Being the text of a press conference addressed by the Education Rights Campaign (ERC), aggrieved students organized under the aegis of the UNILAG Medical Students for Justice (UMSJ) and their parents today, Tuesday 15 March 2016, at the International Press Centre (IPC), Ogba Lagos. 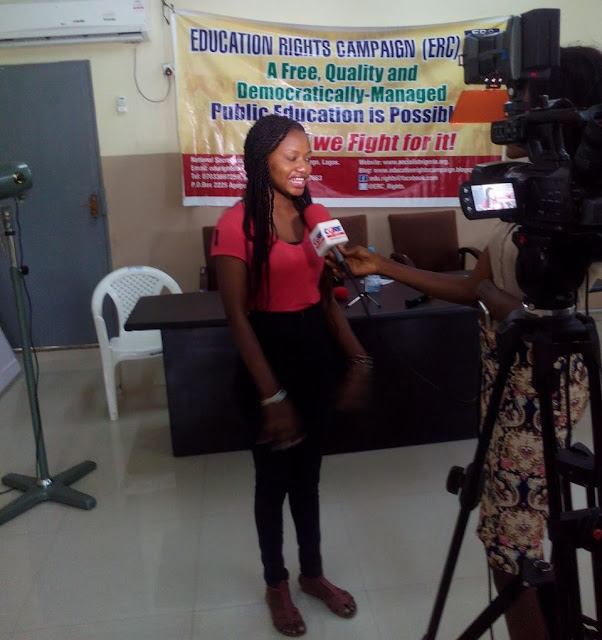 Ladies and Gentlemen of the press,

HIGH-LEVEL INJUSTICE AT THE UNIVERSITY OF LAGOS: OUR CRY FOR JUSTICE

First and foremost, we appreciate the presence of members of the press. The Education Rights Campaign (ERC) and the media have come a long way in the struggle to defend the right of poor and ordinary people to affordable and quality education. Without the support and partnership of the media, many of the battles we have won would have been very difficult to win. This is why we are using this opportunity to again say thank you.

Today we have come to you to report to the whole world another blatant injustice committed against students within our ivory towers. At the University of Lagos, a group of students of the Faculty of Science have had their dreams brutally terminated by a university administration that cares only for the greatest possible accumulation of Internally Generated Revenue (IGR) rather than the future of students in its care. Their tearful story is a testament to the brutal consequences of the “cash and carry” education policy which UNILAG and other University administrations adopted years ago ostensibly to make up for government underfunding of public education.

FACTS OF THE CASE

The affected students are from the Departments of Medicine and Surgery (MBBS), Dentistry, Medical Laboratory, Nursing, Physiotherapy, Pharmacology, Physiology and Radiography respectively. They were all admitted to the above listed programmes of the Faculty of Science after participating in and passing the Unified Tertiary Matriculation Examination (UTME) and the mandatory Post-Unified Tertiary Matriculation Examination (Post-UTME) test for the 2014/2015 academic session.

As everyone knows, admission into the University system is a contract guided by a set of rules and conditions. An admitted student therefore is one who has entered into a binding agreement with the University. This binding agreement stipulated in what is generally known as a STUDENT HANDBOOK often covers conducts, duties and responsibilities expected of a student as well as stipulated academic qualifications required to progress from one class to another up to acquiring the University’s certificate in the respective courses of study. Both parties i.e. students and the University are bound to respect the provisions of this agreement or risk sanctions. In fact, an infraction committed by a student against the stipulations contained in the student handbook is enough to lead to a set of discipline ranging from suspension, rustication and outright expulsion.

But what happens when the other party to the agreement, in this case the University, commits an infraction against its provisions? Or to put it more clearly, what happens when the University admit students into certain programmes using a set of rules and conditions and then an academic session after, suddenly changes these rules in a violent breach of a contractual agreement? That is the key issue in the current dispute and it is why we have brought the University of Lagos before the court of public opinion.

Please take note that at the time of their admissions into 100 level programmes of the Faculty of Science of the University of Lagos, there were clearly established conditions or minimum entry requirements, as stipulated in the information handbook for pre-medical & pharmacy programmes 2014-2016, for the transfer of a first year (100 level) student into the College of Medicine. On pages 3 to 5 of the information handbook, these minimum requirements are itemized as follows:

However, they were disallowed from doing so by the University administration who in the meantime had illegally revised upward the entry requirements into the College of Medicine in breach of the information handbook and other agreements between the University and the affected students. For instance, the cumulative score average of 50 for the Department of Medicine and Surgery, Dentistry, Medical Laboratory Science, Nursing and Physiotherapy was revised upward to possession of a 4.11 CGPA for MBBS, 3.25 CGPA for Medical Laboratory Science, 3.06 CGPA for Physiotherapy, 3.00 CGPA for Nursing, and 3.06 CGPA for Dentistry. In the same vein, the 2.00 CGPA entry qualifications for Pharmacology, Physiology and Radiology programmes was revised upward to possession of a minimum CGPA of 2.5. At the end of this illegal revision, only 169 out of the 271 students that met the original entry requirements were allowed to proceed to the MBBS, MLS, Nursing, Radiography and Physiotherapy programmes of the College of Medicine. The remaining 102 students were simply commandeered by the authorities of the University of Lagos to other programmes!
At a time of crisis in health care delivery in Nigeria as evidenced by the acute shortage of medical and health professionals in the country, the action of the University of Lagos is nothing but a crime against the nation. For instance while the World Health Organization (WHO) recommends one Nurse to 700 persons, Nigeria has a average nurse population ratio of 1 to 1, 066 persons. In the same vein while the WHO recommends an average of one pharmacist per 2000 population, Nigeria has approximately one pharmacist per 12, 000 population. The situation with the doctors is even more alarming. No other person than the Provost of the College of Medicine, University of Lagos, Prof. Folashade Ogunsola made the shocking disclosure in November last year at the opening of a three-day Capacity Development Programme for Bachelor of Medicine, Bachelor of Surgery (MBBS) Academic Staff in Nigerian Universities organized by National Universities Commission in Abuja that there are only 35, 000 doctors in Nigeria while 237, 000 doctors are urgently needed to meet the WHO recommendation of one doctor to 600 persons (Premium Times, Nov 2, 2015). This invariably amount to less than 25 doctors to more than 100, 000 population!  As we all know, this situation has led to countless death of Nigerians especially poor and ordinary citizens who cannot afford the cost of travelling out of the country to seek medical attention.
Please permit us to quote Prof. Folashade Ogunsola again in order to more clearly show to you the dire situation we are in. According to her “Assuming no doctor leaves this country after being trained; going by the number coming from our medical schools every year, it will take us about 100 years to have the number of doctors we need.’’ (Premium Times, Nov. 2, 2015).
Against this background, you can then begin to understand why we accuse the University of Lagos of committing a serious crime against the nation. The country and our universities should be encouraging young people to take up careers in the medical and health professions instead of discouraging them and killing their dreams as University of Lagos is presently doing. It is therefore our strong opinion that the decision of the University to prevent these students to proceed to the College of Medicine is one taken in bad faith, unpatriotic and clearly runs contrary to the needs of the health sector in Nigeria. In short, this decision poses a threat to the health of all Nigerians and the survival of the health sector which is why we are urging members of the public to prevail on the University of Lagos to reverse this ill-advised decision.

Anxious to justify this fraud, the University authorities have resorted to lies, contradictions, half-truth and blackmails. At one point, the University has even claimed that the students failed. Meanwhile, all available records including the students’ statements of result show that they all met the academic requirements or entry points into the College of Medicine as stipulated in the University’s Information Handbook. By changing the entry requirements arbitrarily which constitutes a breach of agreement, it is the University that has committed a crime against the affected students.

On another occasion, the University in a press release issued and circulated by the Information Unit of the Vice Chancellor’s office on 10 February 2016 gave a different reason for its ill-advised decision. According to the press release, the reason for the situation the affected students found themselves was because of the quota system prescribed by the professional bodies regulating the health profession courses at the College of Medicine. To quote the press release, “This year the professional bodies have insisted on the enforcement of the quota upon which accreditation is hinged and hence the College has had to conform … Senate at its meeting held on Wednesday, 27th January, 2016 had approved the implementation of the re-arrangement to conform with the professional bodies quota in order not to lose accreditation. This has regrettably meant that we have been only able to receive students into the College only up to the number the College of Medicine is allowed by the quota”. From this, we can see clearly that the issue was not that the students failed. Indeed at the end of the press release, the University expressed “regret” that its action “has led to some students being unable to cross over into the College of Medicine or their course of choice”.

As far as we are concerned, these quotas are not new. They have always been there. The truth is that because the University runs a foundation course programme concurrently with the UTME class in order to boost its Internationally Generated Revenue (IGR), it has to pick from both classes for transfer into the College of Medicine. Apparently this time around, more students than expected passed and the University had to unjustly devise a method to weed out some in order to keep up within the bounds of the quotas for each programmes. This is why the entry requirements were arbitrarily revised upward thus adversely denying these students the opportunity of crossing over to the College of Medicine. These students have now been asked by the University to transfer to other programmes and those who refuse are being bullied and intimidated.

We hold that the affected students must not be made to suffer for the indiscretion of the university. We demand that they be allowed to proceed to the College of Medicine the entry requirements of which they have successfully met. By killing their dreams, it is Nigeria and Nigerians who urgently need more doctors, nurses and other health professionals that we are killing in the last analysis.