GOVERNMENT MUST MEET THE DEMANDS OF LASU STUDENTS ON FEE REDUCTION! 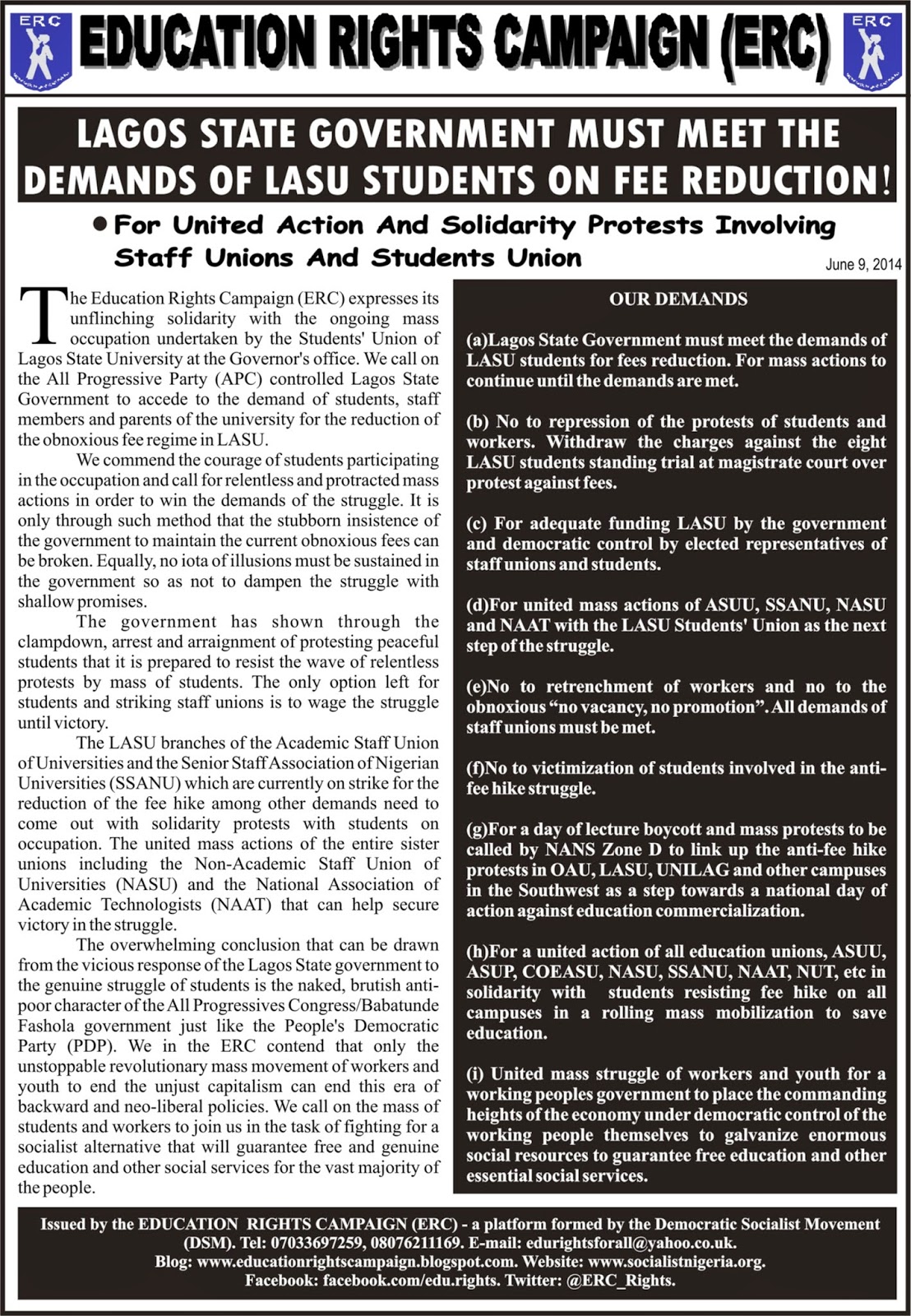 The Education Rights Campaign (ERC) expresses its unflinching solidarity with the ongoing mass occupation undertaken by the Students’ Union of Lagos State University at the Governor’s office. We call on the All Progressive Party (APC) controlled Lagos State Government to accede to the demand of students, staff members and parents of the university for the reduction of the obnoxious fee regime in LASU.

We commend the courage of students participating in the occupation and call for relentless and protracted mass actions in order to win the demands of the struggle. It is only through such method that the stubborn insistence of the government to maintain the current obnoxious fees can be broken. Equally, no iota of illusions must be sustained in the government so as not to dampen the struggle with shallow promises.


The government has shown through the clampdown, arrest and arraignment of protesting peaceful students that it is prepared to resist the wave of relentless protests by mass of students. The only option left for students and striking staff unions is to wage the struggle until victory.


The LASU branches of the Academic Staff Union of Universities and the Senior Staff Association of Nigerian Universities (SSANU) which are currently on strike for the reduction of the fee hike among other demands need to come out with solidarity protests with students on occupation. The united mass actions of the entire sister unions including the Non-Academic Staff Union of Universities (NASU) and the National Association of Academic Technologists (NAAT) that can help secure victory in the struggle.


The overwhelming conclusion that can be drawn from the vicious response of the Lagos State government to the genuine struggle of students is the naked, brutish anti-poor character of the All Progressives Congress/Babatunde Fashola government just like the People’s Democratic Party (PDP). We in the ERC contend that only the unstoppable revolutionary mass movement of workers and youth to end the unjust capitalism can end this era of backward and neo-liberal policies. We call on the mass of students and workers to join us in the task of fighting for a socialist alternative that will guarantee free and genuine education and other social services for the vast majority of the people.


(a)Lagos State Government must meet the demands of LASU students for fees reduction. For mass actions to continue until the demands are met.


(b) No to repression of the protests of students and workers. Withdraw the charges against the eight LASU students standing trial at magistrate court over protest against fees.


(c) For adequate funding LASU by the government and democratic control by elected representatives of staff unions and students.


(d)For united mass actions of ASUU, SSANU, NASU and NAAT with the LASU Students’ Union as the next step of the struggle.


(e)No to retrenchment of workers and no to the obnoxious “no vacancy, no promotion”. All demands of the staff unions must be met.


(f)No to victimization of students involved in the anti-fee hike struggle.


(g)For a day of lecture boycott and mass protests to be called by NANS Zone D to link up the anti-fee hike protests in OAU, LASU, UNILAG and other campuses in the Southwest as a step towards a national day of action against education commercialization.


(h)For a united action of all education unions, ASUU, ASUP, COEASU, NASU, SSANU, NAAT, NUT, etc in solidarity with  students resisting fee hike on all campuses in a rolling mass mobilization to save education.


(i) United mass struggle of workers and youth for a working peoples government to place the commanding heights of the economy under democratic control of the working people themselves to galvanize enormous social resources to guarantee free education and other essential social services.