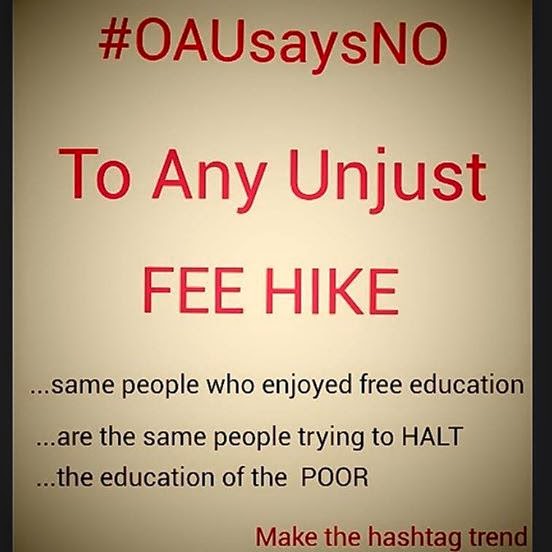 The students of the Obafemi Awolowo University (OAU), Ile-Ife, numbering about 5, 000, trooped out on 20 May 2014 to protest the astronomical increment of fresh students’ fee from N17,000 to about N80,000, (excluding the acceptance fee of N20,000) and the proposed increment of old students’ fee. Though, the management has issued a statement that the old students would not be affected by the fee hike, the Students’ Union leadership claimed to have seen a document at a meeting with the management that shows the plan to increase the fee from N10, 000 to about N50, 000.


After a period of illusion in urging the university management to reconsider its stance, reality of the need to struggle eventually dawned on the students’ union leadership, which has declared for a struggle against the vicious increment. After the failed dialogue, the union president convened for a congress of students, in which Action and Publicity Committees, headed by union leadership, but having representatives of the congress (including members of Democratic Socialist Movement (DSM), were set up. Before now, our comrades and the organization have been the arrowhead of the campaign against the fees. The organization had called, in its various statements, on the union leadership to call student congress and declare struggle. In fact, Education Rights Campaign (ERC), a platform where our comrades are playing leading roles, issued the first ever leaflet against the fees. Aside this, the DSM and ERC members have been very active in this struggle.

Consequent upon the resolution of the Students’ Union Congress on 19th May, students embarked on a protest march to Ife town on Tuesday, 20 May 2014 to register their displeasure and mobilise popular support. Students marched to the Ife/Ibadan Expressway where stranded travellers showed solidarity and understanding on the demands of students. For instance, a parent rained curses on the university management because her two daughters just gained admission into the university, and paying the fees has become nightmare for the family. Even, rank-and-file of the police force, expressed some tactical solidarity, showing the class character of the issue. However, this does not mean that the same police officers will not be used to attack students and workers when the movement subsequently. This shows the nature of the armed forces in a capitalist society. During the protest, students distributed some leaflets, and educated passers-by. The ERC leaflets were also exhausted.
The protesters thereafter moved from the motorway to Ife township, where the leadership of the union addressed the representatives of the Ooni of Ife, the paramount king in the town, at his palace. The gathering proceeded to the local radio station in Ife, where the union leaders granted interviews to journalists. The movement eventually terminated at the Sabo market in the town

In continuation of the struggle, the union has planned to go to markets in the town to enlighten and mobilise the support of traders and artisans against the fee hike. Also, the union has also planned to picket the corporate headquarters of banks to stop them from collecting the fees. 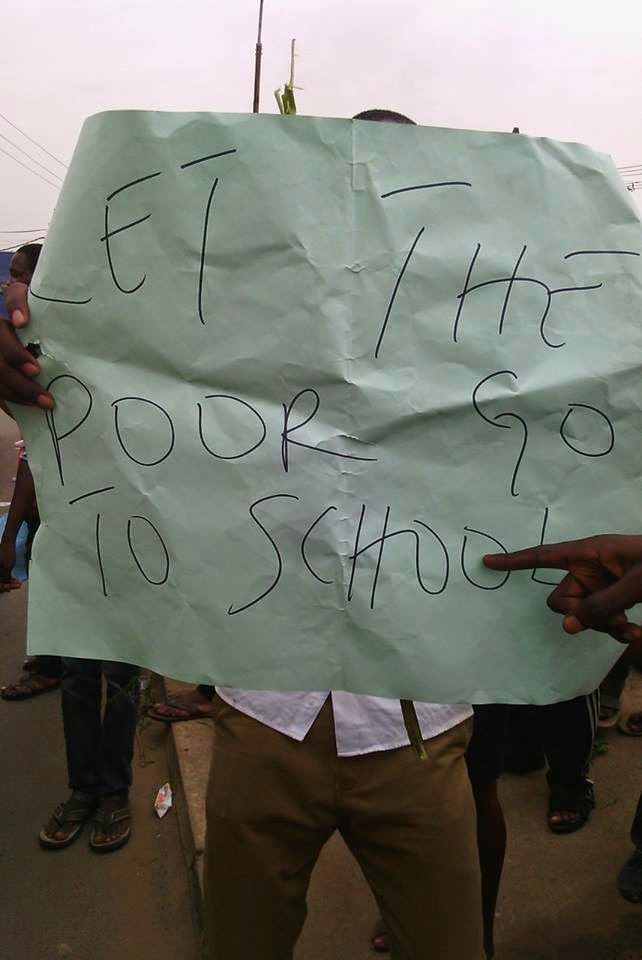 Ultimately, the latest attack on right of students to education in OAU has further underscored the fact that the Nigerian ruling elite is incurably anti-poor and bankrupt. It is ironic that just five months after the ASUU (Academic Staff Union of Universities) secured a yearly subvention of N200 billion for universities, the Nigerian government, through its agents in universities will still be thinking of increasing fees. This is in a country where 70% of the population live below poverty line while the national minimum wage of N18, 000 is hardly implemented by any government across the country. Previous hike in fees in the Lagos State University (LASU) has turned the university to a ghost of itself. Yet, the OAU authorities are embarking on the same ruinous path that will spell doom for students of poor and working class background.

We in the DSM call on workers, students and parents across the country to give solidarity to the struggle in OAU, which is being used by the Federal Government as a laboratory for full commercialization of education across the country. We call on all staff unions, especially in OAU, ASUU, NASU, SSANU and NAAT, to come out against the ruinous policy of the OAU authorities and with solidarity actions in support of students. We also call on Nigerian students’ movement, especially, National Association of Nigerian Students (NANS), Zone D, to organise mass solidarity actions in support of the struggle.

We call for protest text messages and petitions statements against the fee increase to the authorities of Obafemi Awolowo University (OAU), Ile-Ife, through:


You can send copy of your message and petition to the: