Turnout Was Small But Very Combative 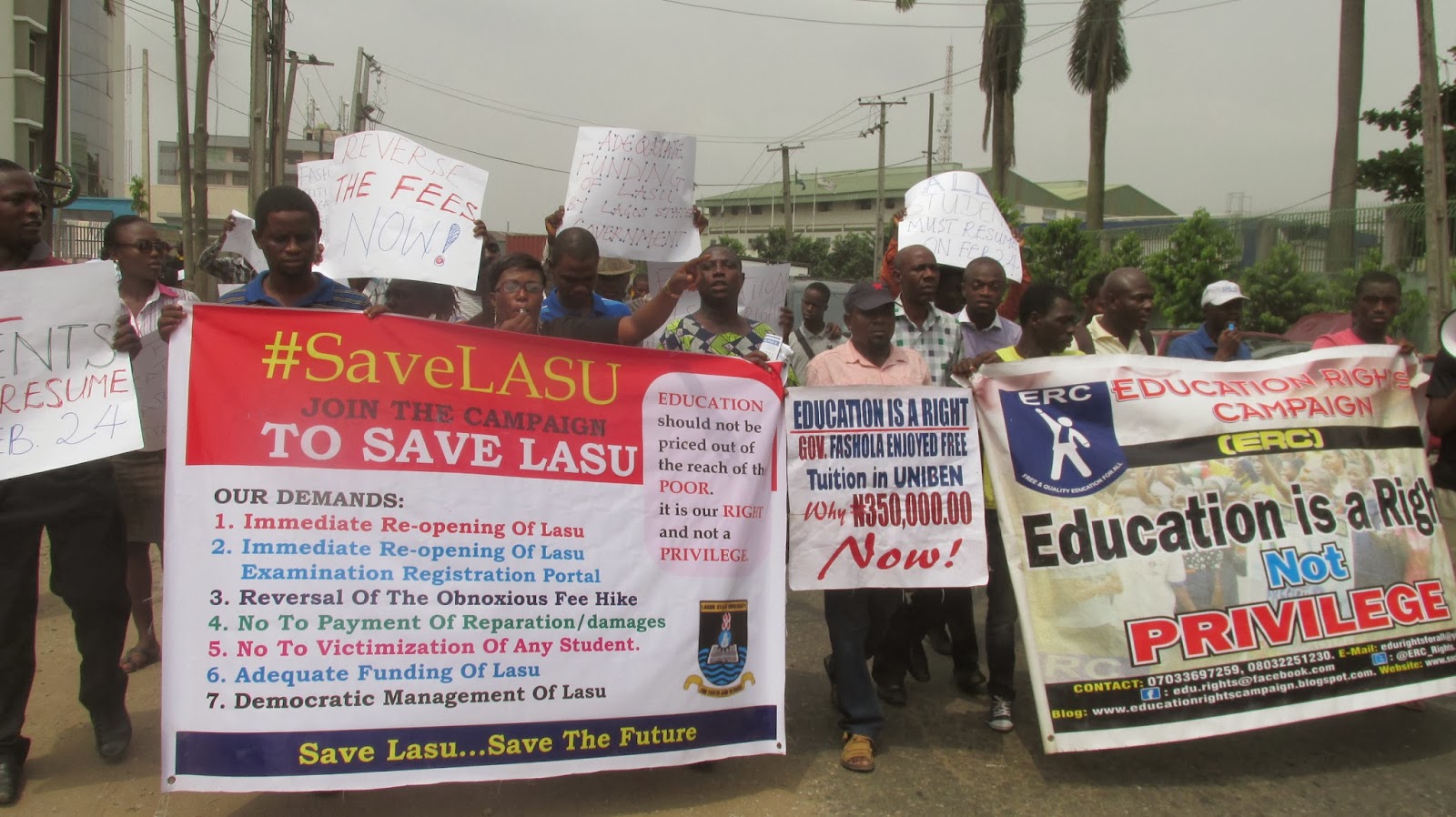 The campaign culminated in a small but combative demo yesterday Tuesday 18  February 2014 as scores of Lagos State University students turned out to demand reopening of their University and reversal of hiked fees.

The #SaveLASU Campaign was formed on February 1st 2014 at a public meeting called by the ERC in reaction to the January 23 2014 students protest at the closure of registration portal against 1,292 students of the University. The protest soon turned violent after campus security and riot police shot indiscriminately at students thus leading to alleged vandalisation of properties and brutalisation of students and closure of the University.

The #SaveLASU Movement identifies fee hike as the root cause of the crisis and is mounting a determined campaign to compel the State Government to reverse the outrageous fee hike which ranges between N195,750 and N348,750 depending on the course of study. This is the highest fee of any Federal or State University and is almost at par with the fees of some private Universities.

The protest which was a culmination of three weeks of meetings, sustained propaganda and other activities of the movement took off from the Textile Labour House - the Secretariat of the Textile workers Union. An online petition opened for about 14 days gathered 120 signatures. This is small but significant given the political situation and level of mass consciousness. The purpose of the demo was to submit this petition listing students demands on reopening, the January 23 crisis and fees to the Lagos State House of Assembly.

Abiodun Aremu (JAF Secretary) and other members of the Joint Action Front (JAF) attended the protest to solidarize with students. Indeed JAF has publicly endorsed the #SaveLASU campaign both on social media as well as physically as demonstrated by the turnout of JAF members and civil society activists for the demo. This is a big boost to the campaign and the effect was not lost on students that participated in the protest. In Abiodun Aremu's words "JAF has endorsed this protest because we believe that the right to education is non-negotiable".

Speaking at the protest, H.T Soweto (ERC National Coordinator) berated the government for increasing fees in LASU. According to him, the fee hike is anti-poor and shows that the All Progressive Congress (APC) is not different from the PDP. He also mentioned the hypocrisy of the APC government which claims to be progressive but implements anti-poor policies.

Practise What You Preach
Indeed the hypocrisy of the APC was the uppermost in the hearts and mind of protesters as well as members of the public who witnessed the demo. The party has been the ruling party in Lagos State since 1999 yet vast majority of Lagosians wallow in untold poverty, many are still homeless and education has been priced out of the reach of the mass majority. Truly the Lagos State government invests on road and infrastructure projects but the reality has dawned on many that these projects are done for the purpose of farming public resources to cronies and are not necessarily meant to address people's real needs and this tells with the poor quality of the works. Also is the fact that most of these road infrastructures are restricted to the main roads and areas where the rich go as thousands of inner community roads are still untarred, pot-hole dotted and generally in a state of utter neglect over 14 years since the APC has been in power in Lagos State.
While submitting the petition to the Deputy Speaker of the Lagos State House of Assembly who was on ground to receive the protesters, Soweto pointed out the newest manifestation of the APC's hypocrisy. According to him, just few days ago on 15 February 2014, Bola Tinubu (APC National Leader and former governor of Lagos State who carried out the first increment of fees in LASU from N250 to N25,000) was at the Njala University Sierra Leone to receive an honourary doctorate award.

In his acceptance speech, Tinubu said the following "We formed the APC so Nigerians from all walks of life and social station might gather under one tent to develop the nation on the basis of equity and shared prosperity. What we seek is a fair social compact so that we may avoid social calamity. A core element of our mission is to make all levels of education, from primary to university level, accessible to all people, regardless of economic circumstance. To survive in the modern economy, education is a must. As such, responsible leadership must view education as a public right and no longer a luxury to be enjoyed only by those with the money to purchase it for themselves. Government must help financially those who can't help themselves in this essential regard".

Linking this with a similar and widely-condemned trip last year by the President's Wife Dame Patience Jonathan to an Asian University to receive an award during a six month strike by the Academic Staff Union of Universities (ASUU) which had shut all public Universities in Nigeria, Soweto simply asked the Deputy Speaker who is also an APC member to practice what they preach.

Next Steps
The protest ended with assurances that the petition will be given attention by the House. So elated were the students about the impact of the protest that many were immediately asking for the next step. This is a good one. It shows that having sensed their power the students are ready to take the next step.

For this purpose, the #SaveLASU Campaign will hold another mass meeting on Saturday 22, February 2014 by 10am at the ERC Secretariat located at 162, Ipaja Road, Agbotikuyo Bus Stop, Agege Lagos. This meeting is important to plan the next stage especially now that the University management in an effort to divide the mass of students has announced the re-opening of the University for Monday 24 February 2014 but for final year students alone. Other categories of students who are suspected to have initiated the January 22 and 23 protests would not resume until 1st April 2014 after fresh students would have been admitted and matriculated. This is absurd and many students instinctively feel this should be resisted.

The #SaveLASU Campaign has also rightly condemned it with a promise to resist it. The campaign has demanded that all students must resume on the 24 February and all the 1,292 students must be allowed to register on the portal. It is however also very important to plan strategies on how to resist this "divide and rule" tactics and build the best possible unity of all students against the University Management's highhandedness and the fee hike and other anti-poor education policies of the State Government.

The #SaveLASU movement has the potential to become bigger if built with the right tactics and commitment of all groups and activists within it. Widespread media reportage of the protest already shows the impact of the movement at this early small stage and is also a confirmation of the correctness of the issues the movement is campaigning over.

It is however crucial right from this early stage for students and other participants in the #SaveLASU Campaign to draw the political conclusion that to fully defeat APC's anti-poor education policies requires not only protests at this or that of their policies but also the building of a political alternative to boot them out of power such as the Socialist Party of Nigeria (SPN) which the DSM in collaboration with other working class fighters is presently building. It is only by proffering a Socialist alternative that the second leg of the #SaveLASU movement's slogan "Save LASU! Save the Future" can be realised for the benefit of the mass majority of working class youth who can never hope to have neither good education nor a good future for as long as the APC and PDP capitalist bandits continue to rule.

You must b a fool and selfish som1,am also a lasuite oooo n m 2l,lts fight togeda,and m sure d victory is certain wt joint hands